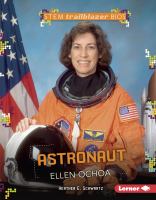 "This inspiring, STEM-focused biography describes the life and influential work of Ellen Ochoa, the first female Hispanic astronaut to go to space"--

In straightforward chapters with plenty of photos, entries in the STEM Trailblazer Bio series showcase notable inventors and scientists who broke barriers in their fields. Astronaut Ellen Ochoa profiles the titular engineer, who, apart from being the first Hispanic woman in space, has several patents under her belt and is the current director of the Johnson Space Center. Though they're a bit on the dry side, these biographies hit the major highlights of their subjects' lives, and with a broad range of topics in the series, including many contemporary women of color working in STEM fields, these will be useful starting points for students looking for research topics. Copyright 2017 Booklist Reviews.

When Ellen Ochoa was young, male American astronauts walked on the moon. But girls were not allowed to be astronauts. Girls didn't often study science either—but Ochoa didn't let that stop her. In high school, Ochoa loved math and science. In college, she studied physics and engineering, and later she became a scientist and inventor. Eventually NASA began accepting women into their astronaut training program. While there, Ochoa developed technology, became the first female Hispanic American astronaut, and logged 1,000 hours in outer space. Learn about Ochoa's hard work and perseverance on her journey toward becoming a scientist, inventor, and astronaut.