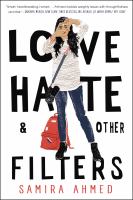 Maya Aziz, seventeen, is caught between her India-born parents world of college and marrying a suitable Muslim boy and her dream world of film school and dating her classmate, Phil, when a terrorist attack changes her life forever.

*Starred Review* Competing crushes verging on love, looming decisions about college, and a terrorist attack factor into Ahmed's searing YA debut, a coming-of-age portrait of a contemporary Indian American Muslim teen, Maya Aziz. It's spring of Maya's senior year in Batavia, Illinois, as she weighs dually defying her parents: first, by eschewing their pick for her, the dreamy and charming desi Kareem, in favor of Phil, the white football player she's long crushed on who's finally showing her attention. And second, by choosing to study filmmaking at NYU, where she secretly applied and was accepted, over the close-to-home University of Chicago. A terrorist attack in nearby Springfield eclipses these big decisions: the suspect bears the last name Aziz, too, and Maya and her parents become targets of local anti-Muslim rage. Maya's daily concerns are upended, as she notes, "in this terrible moment, all I want is to be a plain old American teenager . . . who isn't presumed terrorist first and American second." Ahmed crafts a winning narrator—Maya is insightful, modern, and complex, her shoulders weighted by the expectations of her parents and the big dreams she holds for herself. Brief interstitials spread evenly throughout the text key readers into the attack looming ahead, slowly revealing the true figure behind its planning with exceptional compassion. Utterly readable, important, and timely. Copyright 2017 Booklist Reviews.

In an astute debut, Ahmed intertwines a multicultural teen's story with a spare, dark depiction of a young terrorist's act. High school senior Maya Aziz, a budding filmmaker, struggles with being the beloved and protected only child of Muslim immigrants from India while trying to live a "normal" American teenage life in Illinois and, more importantly, make her own decisions about her future. Stealthily defying her parents by applying to New York University and juggling appropriate and inappropriate love interests (all with the help of her maverick aunt), Maya finally gets up the courage to confront her parents when the terrorist's actions unleash hatred on her and her family. Ahmed builds tension by preceding each chapter of Maya's story with a terse paragraph leading to the imminent act of terror, then provides a startling twist; Maya's final and uncharacteristic act of rebellion also comes as a surprise. The characters are fully dimensional and credible, lending depth to even lighter moments and interactions. Alternately entertaining and thoughtful, the novel is eminently readable, intelligent, and timely. Ages 14–up. Agent: Eric Smith, P.S. Literary. (Jan.) Copyright 2017 Publishers Weekly.

Gr 9 Up—Maya Aziz should be on top of the world. She got accepted into film school at NYU, and the cute boy she has been spending time with seems to be into her. The only problem is, she's been hiding all of this from her loving but very traditional Indian American parents. They have already chosen a local college for her to attend and introduced her to a nice Muslim boy who is (eventual) marriage material. As she builds up courage to tell them the truth, a terrorist attack takes place nearby, and one of the suspects shares the same last name as Maya's family. They are suddenly the targets of suspicion, fear, and intimidation in their own community. Maya is singled out by an unhinged student at her school, and when his harassment escalates to violence, not only is she physically hurt, but all of the ground she gained with her parents is lost as their protective instincts go into overdrive. Maya's voice is pitch-perfect; funny, warm, and perfectly teenaged in its bouncing focus—she is afraid for herself and her family, crushed by the hatred she is facing in her community, scared of disappointing her parents—but she also really wants to go to film school and is really falling in love. Sweet and smart with a realistic but hopeful ending, this novel is a great examination of how hatred and fear affects both communities, and individual lives. VERDICT Recommended for all libraries serving teens.—Beth McIntyre, Madison Public Library, WI Copyright 2017 School Library Journal.

American-born Maya Aziz, a Muslim teen, struggles with a growing disparity between her dreams and her parents' expectations that she pursue a traditional life, a situation that is complicated by a terrorist attack by a prime suspect who happens to share her last name, causing her suburban Chicago family to be targeted by hate. Simultaneous eBook.

Maya Aziz, seventeen, is caught between her India-born parents world of college and marrying a suitable Muslim boy and her dream world of film school and dating her classmate, Phil, when a terrorist attack changes her life forever.

A NEW YORK TIMES BESTSELLERIn this unforgettable debut novel, an Indian-American Muslim teen copes with Islamophobia, cultural divides among peers and parents, and a reality she can neither explain nor escape.   Seventeen-year-old Maya Aziz is torn between worlds. There’s the proper one her parents expect for their good Indian daughter: attending a college close to their suburban Chicago home and being paired off with an older Muslim boy her mom deems “suitable.” And then there is the world of her dreams: going to film school and living in New York City—and pursuing a boy she’s known from afar since grade school. But in the aftermath of a horrific crime perpetrated hundreds of miles away, her life is turned upside down. The community she’s known since birth becomes unrecognizable; neighbors and classmates are consumed with fear, bigotry, and hatred. Ultimately, Maya must find the strength within to determine where she truly belongs.