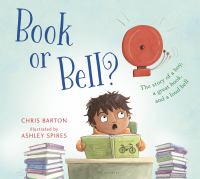 Engrossed in a book, Henry decides to ignore the school bell, which sets off a chain reaction.

Henry has been in school long enough to know how to respond to the ringing of the school bell. But after finding a highly captivating book about a bike during library time one Tuesday, Henry breaks away from his routine: all he wants to do is read. "The school was not prepared for anyone to just stay put. By not springing up with the ringing of the bell, Henry set off a chain reaction unlike anything they'd ever seen." School leaders are beside themselves while government officials step in, suggesting a series of ever-louder bells, but the increased clanging only creates more catastrophic chain reactions, both in school and around town. It's all helter-skelter until Ms. Sabio, Henry's teacher, puts her simple idea to action. Barton couples engaging storytelling with Spires' hilariously chaotic scenes featuring a multicultural cast of comical characters. With a balanced mix of anticipated and unpredictable moments and lots of onomatopoeia, this sidesplitting story will keep young readers highly amused till the very end. Copyright 2018 Booklist Reviews.

School bells keep things running smoothly, as any student or administrator knows, but a boy named Henry is tired of them interrupting his reading. When Henry refuses to leave his seat, the finely tuned machine of his school breaks down: because he isn't in the cafeteria line, "the food that would have gone on Henry's tray went—SPLOT!—onto the floor." And "with the best player missing from PE, lots of balls rolled out of the gym... and into the street." The mayor, governor, and a senator are called in, but their solution—louder and louder bells—only make things worse. Barton alludes to but doesn't entirely explore the ideas of appropriate reading times and the pitfalls of life ruled by the clock. His exaggerated descriptions of the klaxons are sure to get big laughs, though: one "blasted like a ton of air horns getting smashed by a freight train." Spires has as much fun drawing the chaos caused by the booming bells, which blow the ink off whiteboard and send clothes and backpacks flying. Ages 4–8. Author's agent: Erin Murphy, Erin Murphy Literary. Illustrator's agent: Claire Easton, Painted Words. (Oct.) Copyright 2017 Publishers Weekly.

K-Gr 2—Finding the perfect book means everything to Henry, for once he has started reading, nothing will convince him to stop—"He decided to just stay put." No version of a louder bell, not even the "mega-giga-decibel monstrosity illegal in seventeen states" preferred by the state's Senator Brilliant can make him budge. Recommendations from his teacher, principal, mayor or governor are ignored, until his teacher discovers the call to his heart—a personal interest that builds and then surpasses his favorite book about bicycles. Digitalized watercolor and ink art follows the mayhem as a succession of illustrations highlights the chain-reaction effects of Henry's insistence on staying put. Fantastical machines designed to get his attention perfectly match the pacing of humorous text with the "bronkitybronkitybronkity…" of an increasingly louder bell. VERDICT Designed to appeal to any child dreaming of the perfect read and a bit of control over their surrounding environment, this offering features plenty of action with a satisfying ending. A suggested general purchase for all libraries.—Mary Elam, Learning Media Services, Plano ISD, TX Copyright 2017 School Library Journal.

Engrossed in a book, Henry decides to ignore the school bell, which sets off a chain reaction.

From the best-selling author of Shark vs. Train comes another high-stakes battle . . . between a boy who simply won’t put down his book and the school bell!

The first page has Henry hooked.The second page has him captivated.The third page . . .BBBBRRRRIIIIINNNNNGGGGG!. . . will have to wait.That is, unless Henry ignores the bell, stays put, and keeps on reading the most awesome book.By not springing up with the ringing of the bell, Henry sets off a chain reaction unlike anything his school or town has ever seen. Luckily, Mayor Wise, Governor Bright, and Senator Brilliant know exactly what the situation calls for:A louder bell. MUCH louder.With this hilarious, high-energy satire from bestselling author Chris Barton and illustrator Ashley Spires, readers will be cheering louder still as one of their own continues to just stay put.