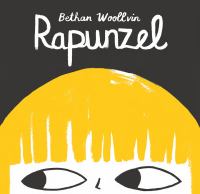 "The prisoner of an evil witch, Rapunzel lives all alone in a tall, dark tower. If she ever escapes, the witch will put a terrible curse her. But is Rapunzel frightened? Oh no, not she!"--

In Woollvin's newest fairy tale retelling, Rapunzel isn't a stereotypical damsel in distress waiting around for a knight in shining armor. Per usual, the evil witch has trapped Rapunzel in the tall, dark tower all alone and threatened to curse her if she ever tries to escape. "But is Rapunzel frightened? Oh no, not she!" She devises a way to escape on sojourns and fills her days with exploring the outside world and formulating a plan to free herself from the witch forever. When the witch next pays her a visit, using Rapunzel's hair, Rapunzel simply snips her tresses, and the witch tumbles to her demise. Rapunzel is now free (and with a cute bob to boot) and can devote the rest of her life to capturing other witches. Utilizing simple, bold strokes of yellow, black, and gray inks, Woollvin expressively fills each page with eye-catching details that will bring readers back for another look. Fans of her Little Red (2016) will enjoy her latest feisty and intelligent heroine. Copyright 2017 Booklist Reviews.

It's about time that Rapunzel saved herself, and in Woollvin's sly follow-up to 2016's Little Red, she does exactly that. Rapunzel's hair, the witch's gold-patterned knickers, and other unexpected treasures stand out in brilliant yellow while the rest of the scenery—Rapunzel's tower and the stubby forest that surrounds it—is painted in blacks and grays. The witch, whose cloak sticks out from her body like it's made of cardboard, hoists herself up the tower and into Rapunzel's room, where she brushes her captive's long tresses, then snips several locks "to sell for riches." Despite the threat of a "terrible curse," Rapunzel isn't intimidated in the least: she finds a way to let herself out and spends hours in the forest making friends and reading How to Defeat Witches. When the witch finds a leaf in her hair Rapunzel doesn't flinch: "The wind must have blown that in through the window," she says coolly. Thanks to Woollvin, readers may grow up thinking this just-wicked-enough retelling is the classic one; if they ever stumble across versions with the prince, they may wonder why he was thought necessary. Ages 5–9. (Oct.) Copyright 2017 Publisher Weekly.

K-Gr 3— Rapunzel is a spunky girl with hair made of gold. The witch who climbs her tresses daily, steals some to sell and threatens a terrible curse if Rapunzel should ever leave the tower where she's kept captive. (At this juncture, readers find a hilarious picture of an irate frog with long yellow hair.) But this clever girl realizes that if the witch can get into the tower via her hair, she can use it to get out. After befriending a horse—not a prince—in the forest at the foot of her tower, Rapunzel formulates a plan to escape both the witch and her curse. The resolution is a bit violent, but not nearly as much as the original fairy tale, and it's more empowering. Woollvin's first book, Little Red , introduced readers to her quirky, folkloric black, white, and gray illustrations enlivened by a single, startling primary color on the heroine. VERDICT Children will adore Rapunzel and cheer her victory over evil personified. A perfect length for storytime and those seeking fairy tale variants.— Susan Weitz, formerly at Spencer-Van Etten School District, Spencer, NY Copyright 2017 School Library Journal.

"The prisoner of an evil witch, Rapunzel lives all alone in a tall, dark tower. If she ever escapes, the witch will put a terrible curse her. But is Rapunzel frightened? Oh no, not she!"--

A little girl who lives all alone in a tall, dark tower where she has been imprisoned by a wicked witch proves that she is unafraid and resolves to escape a life in captivity, with hilarious and empowering results.

The wicked witch has Rapunzel trapped…but not for long!Rapunzel lives all alone in a tall, dark tower. Under the threat of a witch’s fearsome curse, the poor girl seems doomed to a life in captivity. But is Rapunzel frightened? Oh no, not she!With irreverent humor and striking illustrations, the creator of Little Red puts an empowering and delightfully dark twist on a classic story of a helpless damsel.

Imprisoned in a tower by an evil witch, Rapunzel isn't frightened by the witch's curse and devises a plan for escape.

This humorous retelling of the classic fairy tale spins a delightful, girl power twist, from New York Times Best Illustrated Book-winner Bethan Woollvin.Rapunzel lives all alone in a tall, dark tower. Under the threat of a witch's fearsome curse, the poor girl seems doomed to a life in captivity. But is Rapunzel frightened? Oh no, not she! Rapunzel has a few tricks up her sleeve, and she's not afraid to use them.With sly humor and striking illustrations, author-illustrator Beth Woollvin, creator of the New York Times Best Illustrated Book, Little Red, replaces the typical damsel in distress with a brave, smart, and creative girl.