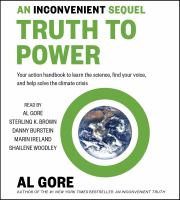 An inconvenient sequel Truth to power : your action handbook to learn the science, find your voice, and help solve the climate crisis

Follow Vice President Gore around the globe as he tells a story of change in the making and offers real actionable steps that listeners can take to help reverse the damage. This riveting and thought provoking book is a must have for everyone who cares deeply about the planet.

Gore's sequel to An Inconvenient Truth has a wide scope that includes an update on the state of climate change, a look at those who have taken up the cause since the original documentary was released, and a guide to fighting climate change. The production comes across awkwardly, which is unsurprising considers it is a resource guide turned documentary turned audiobook. It strives for the conversational yet highly produced style of popular podcasts, but falls short. The book employs different voices for each segment­—profiles, actions to take, knowledge to consider—and occasional musical segues, but each voice feels divorced from the previous section, which makes the listening experience disjointed. One part that's especially off-putting is the interview between Gore and artist-activist Shepard Fairey, in which actor Marin Ireland performs Gore's contributions, which is odd considering that Gore reads for the introduction and conclusion. The book has a lot of invigorating parts to inspire and motivate people, but the consideration that went into the documentary is absent from the audiobook. A Rodale paperback. (July) Copyright 2017 Publishers Weekly.

Published to coincide with the release of the former Vice President's new documentary of the same name, a follow-up to An Inconvenient Truth shares updates on the role of humanity in triggering the planet's destruction and what everyday people can do to promote environmental health. Simultaneous. Movie tie-in.

Fresh off the heels of a successful debut at the Sundance Film Festival, Al Gore’s follow-up to his eye-opening blockbuster An Inconvenient Truth comes at a time when climate change is a daily headline and audiences are more eager than ever to act on behalf of the planet.“We’re going to win this…If anybody doubts that we have the capacity and the will to act, just remember that the will to act is itself a renewable resource.” —Al GoreAl Gore has been advocating on Earth’s behalf for twenty-five years. In An Inconvenient Sequel he recounts and contextualizes the critical issues and moments in the climate change movement since the release of An Inconvenient Truth more than ten years ago, and highlights the real solutions we have at hand to change the planet for the better.