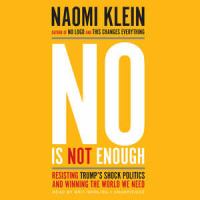 Journalist Naomi Klein explains that Trump is not an aberration but a logical extension of the worst and most dangerous trends of the past half-century.

Klein deconstructs the ways in which Donald Trump's presidency represents a culmination of free-market policy, wealth concentration, and media manipulation to create a Frankenstein's monster that has the ability to do harm that will impact the world for generations. She identifies strategies both local and global that people can use to minimize the damage. Marling reads in a soft, smooth voice that draws listeners in most effectively during the more personal parts of the narrative, such as when Klein talks about how she has experienced Trump's rise and early presidency or when discussing her child's future. But Marling falters capturing Klein's command and intensity when delving into the details of Trump's crass antics, economic interests, questionable dealings, and encouragement of white supremacists. Klein's prose hints at anger, disdain, and reproach, but Marling's tone sounds lackadaisical and even passive, which is antithetical to the book's overall message. A Haymarket paperback. (June) Copyright 2017 Publisher Weekly.