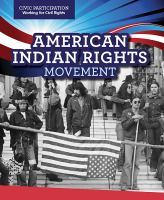 Traces the history of Native American relations with people of other origins from their arrival in North America through generations of broken treaties and forced removals to the current situation.

This entry in the Civic Participation: Working for Civil Rights series takes a decidedly sympathetic stance on the plight of American Indians throughout history. A succinct explanation of how the ancestors of American Indians are thought to have first come to the continent kicks this off, followed by brief details on how Native Americans suffered at the hands of European settlers and American expansionists. Reservation life, broken promises by the U.S. government, and poverty and discrimination were among some of the challenges faced, and the American Indian Movement was founded in the 1960s in order to combat them. This details the efforts made, successful and otherwise, by this activist group, and the battles they still fight today. A glossary and time line close out this valuable look at an often-buried slice of American history and discrimination. Copyright 2017 Booklist Reviews.

Gr 4–7—Though the United States is known as the land of the free, this has not been the case for many groups through much of its history. This series offers a wide scope, targeting a number of populations affected by social injustice and less represented in children's literature, namely Native Americans, Mexican Americans, the disabled, and the LGBTQ community. This introductory set relates their struggles to achieve essential human rights and dignities in language that is accessible and relatable while providing a basic introduction to key historical events, legislations, and personalities in the movements. The outcome and future of each cause are discussed, with an invitation for readers to become engaged by learning tolerance and social acceptance. A good balance of text and visuals, such as archival photographs, paintings, and drawings, results in a clean, orderly appearance that is visually appealing and informative. VERDICT A fine introductory survey of civil rights issues that prompts reader involvement. Consider for report writers. Copyright 2017 School Library Journal.

American Indians have faced injustice from the moment Europeans came to the Americas to claim land and resources. This volume traces the history of injustice against American Indians, from losing their land, to moving to reservations, to having their culture stolen from them. Readers will learn how the movement for rights began, and the challenges and successes activists faced. Primary sources and photographs from the movement will bring readers back in time to fully grasp the importance of events. The book concludes by challenging readers to think about how they could help advance American Indian rights today.