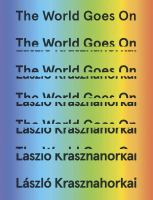 The world goes on

In the opening piece in Man Booker International Prize winner Krasznahorkai's near-mystical new work, a wanderer seeking to leave a forbidding place at first finds his hands and feet bound, then manages a "forced march" before falling over exhausted and realizing that he will die "there at home, where everything is cold and sad." Rather like life darkly perceived or the depths of depression. The piece perfectly sets up what follows: dense, stylized meditations that aren't exactly fiction or essay or philosophical treatise but something sui generis, representative of Krasznahorkai's unique mind. A lecturer's investigation of melancholy, reflections on moral law inspired by Nietzsche's paralysis after witnessing a horse's beating—these are the wonders and challenges found here. VERDICT Definitely for high-end readers; for the curious, a good place to start. Copyright 2017 Library Journal.

Krasznahorkai's latest begins in a void, out of which speaks a voice who wants to escape the world, where everything "is intolerable, unbearable, cold, sad, bleak, and deathly." From there, the speaker embarks on a series of monologues in which he circles the globe, tries to outrun it, wants to forget it, then delivers three lectures on melancholy, revolt, and possession. These exercises concluded, a set of enigmatic short stories unfold. In "Nine Dragon Crossing," a man obsessed with waterfalls becomes lost in contemplation of the winding streets of Shanghai. In "One Time on the 381," a Portuguese miner stumbles upon a buried palace. The iconoclastic filmmaker of "György Fehér's Henrik Mólnar" recalls Krasznahorkai's own collaborations with director Bela Tarr. The ecstatic "A Drop of Water" concerns an encounter with a Buddha on the banks of the Ganges. Other stories take readers to a baroque and sensual Venice or resume the theme of leaving the world through the story of Russian cosmonaut Gagarin. In the end, the storyteller bids farewell and departs into eternity, leaving readers to puzzle over the parables, dialogues, and tales. This book breaks all conventions and tests the very limits of language, resulting in a transcendent, astounding experience. (Nov.) Copyright 2017 Publisher Weekly.

The award-winning author of Satantango presents an evocative new collection of stories, linked by a common narrator, which relates the experiences of such protagonists as a waterfall-obsessed Hungarian interpreter and a Portuguese child laborer who wanders into an alien realm.