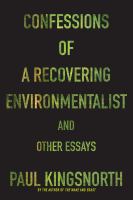 Confessions of a recovering environmentalist and other essays

In the introduction to his first compilation of essays, poet and novelist Kingsnorth admits that during his late teens and twenties, joining the British Road protest movement and serving as a Greenpeace editor, he firmly believed grass roots activism could turn the tide against ecological disaster. With the publication in 2009 of "Uncivilization," coauthored with Dougald Hine and included as this volume's epilogue, Kingsnorth signaled his break from the environmental movement, arguing that the inexorable forces of civilization itself represent the gravest dangers to our planet. Together, Kingsnorth and Hine formed The Dark Mountain Project, an artists and writers collective committed to crafting a new narrative about civilization that includes a more primal connection to nature than the one sustainability organizations currently promote. Most of the pieces here came out of this project, from the title essay describing his disillusionment with green energy schemes to "The Witness," dissecting the evidence for a looming mass extinction. A brilliant and sobering collection recommended for anyone, liberal or conservative, concerned about the runaway train of climate change. Copyright 2017 Booklist Reviews.

A former environmentalist and the creator of the Dark Mountain Project, an online global network of artists and authors, Kingsnorth (Beast; The Wake) states in the introduction to this intriguing title that by 2008 he had stopped believing that the planet could be saved through activism. By then, he was certain that human beings, obsessed with growth and progress and convinced that the universe revolves around them, are unwilling to effect real change. Kingsnorth's disenchantment with the environmental movement is evident; he describes it as "a human-centered piece of politicking disguised as concern for 'the planet.' " The author cites wind farms as an example of an environmentalist half measure: while they don't pollute the atmosphere like fossil fuels, they do destroy otherwise untouched land. At the end of the book, Kingsnorth offers an alternative solution from his website's manifesto Uncivilisation, a challenge to artists and writers to transform the human narrative. VERDICT Kingsnorth's essays are sobering and thought provoking. Recommended for those worried about the planet yet frustrated with the modern environmental movement.—Dave Pugl, Ela Area P.L., Lake Zurich, IL Copyright 2017 Library Journal.

In this eclectic but uneven essay collection, Kingsnorth (Beast), an English novelist and cofounder of the Dark Mountain Project, tries to reconcile his past with the present, highlighting his growing disillusion with the environmental movement. These 18 essays, most of which were originally published between 2010 and 2016, deal broadly with feelings of frustration, disconnection, and loss. In his youth Kingsnorth fancied himself a conservationist, "preventing the destruction of beauty and brilliance, speaking up for the small and the overlooked and the things that could not speak for themselves." Now, however, Kingsnorth admits to disenchantment with the environmental movement's shift toward sustainability and questions its effectiveness. In "Rescuing the English," he ruminates on ways in which Britain has been changed by global capitalism. "The small and the local, the traditional and the distinctive, were being stamped out by the powerful," he writes. Kingsnorth bemoans the erosion of England's national identity and cautions against an influx of newcomers, sentiments that have an analogue in certain aspects of the Brexit movement. Some selections, including one on his frustrations with the quantification of environmental issues and another on the "difference between action and activism," prove difficult to dive into or to decipher. Kingsnorth offers an idiosyncratic perspective as well as an occasional test of the reader's patience. Agent: Jessica Woollard, David Higham Associates. (Aug.) Copyright 2017 Publisher Weekly.

The author's collection of essays explains why he grew disenchanted with the environmental movement and argues for a shift in focus to a renewed balance between the human and nonhuman worlds.

Gathering the thought-provoking essays that changed his course of thinking, a former activist presents this volume that asks how we can live with hope in “an age of ecocide” and articulates his new vision, called “dark ecology,” that stands firmly in opposition to the belief that technology can save us. By the author of The Wake and Beast. Original.

Offers a collection of non-fiction essays exploring the state of the world as ecosystems, economies and assumptions collapse around us. Kingnorth's essays chart the change in his thinking as he grew disenchanted with the environmental movement he once embraced and articulate a new vision, one that stands firmly in opposition to the belief that technology can save us. He argues for a renewed balance between the human and nonhuman worlds. --Adapted from publisher description.

A provocative and urgent essay collection that asks how we can live with hope in “an age of ecocide”Paul Kingsnorth was once an activist—an ardent environmentalist. He fought against rampant development and the depredations of a corporate world that seemed hell-bent on ignoring a looming climate crisis in its relentless pursuit of profit. But as the environmental movement began to focus on “sustainability” rather than the defense of wild places for their own sake and as global conditions worsened, he grew disenchanted with the movement that he once embraced. He gave up what he saw as the false hope that residents of the First World would ever make the kind of sacrifices that might avert the severe consequences of climate change.Full of grief and fury as well as passionate, lyrical evocations of nature and the wild, Confessions of a Recovering Environmentalist gathers the wave-making essays that have charted the change in Kingsnorth’s thinking. In them he articulates a new vision that he calls “dark ecology,” which stands firmly in opposition to the belief that technology can save us, and he argues for a renewed balance between the human and nonhuman worlds.This iconoclastic, fearless, and ultimately hopeful book, which includes the much-discussed “Uncivilization” manifesto, asks hard questions about how we’ve lived and how we should live.