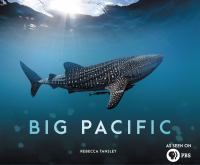 "The Pacific Ocean covers one-third of Earth's surface--more than all of the planet's landmasses combined. It contains half of the world's water, hides its deepest places, and is home to some of the most dazzling creatures known to science. The companion book to the spectacular five-part series on PBS produced by Natural History New Zealand, Big Pacific breaks the boundaries between land and sea to present the Pacific Ocean and its inhabitants as you have never seen them befo...re"--Amazon.com