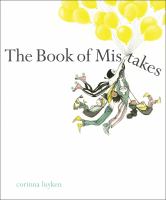 The book of mistakes

"As an artist creatively incorporates her slipups into a drawing, readers see the ways in which 'mistakes' can provide inspiration and opportunity, and reveal that both the art and artist are works-in-progress"--

*Starred Review* An inkblot and a face with an eye that's too big—are those mistakes? The juxtaposition of mistakes and opportunity is the through line of this original offering that gives children a new way to think about the creative process. Each turn of the oversize, snow-white pages adds a fresh detail to the ink painting slowly being constructed. As the minimal text notes, some are good ideas—the glasses on the character's face, for instance. Others, like the extra-long neck, not so much. But as the artwork becomes more detailed, and bits of color, then more, are added here and there, it becomes clear that even the unintentional or the unappealing can be turned into embellishments that enhance the whole. Sometimes the mistakes fundamentally change the whole, but if children are open to getting off the beaten path, they can find themselves immersed in magical new endeavors. Luyken, a debut author, delves into her own creative process, providing images to ponder. The final few spreads, especially, can be the springboard for an interesting discussion of imagination. One thing's for sure: this will lead kids to see their own so-called mistakes in a new, more positive light. Copyright 2017 Booklist Reviews.

Almost any child knows the feeling: one errant mark or smudge, and an in-progress drawing or painting is as good as ruined. Not so, says Luyken, in a children's book debut that's as candid as it is encouraging. The pages are virtually blank, at first, and readers watch as a character takes shape: a girl's round head appears, traced in pencil, but one of her large, dark eyes winds up noticeably larger than the other. "Making the other eye even bigger was another mistake," Luyken admits as the problem seems to get worse. "But the glasses—they were a good idea." Additional "mistakes" mount: the girl winds up with an overlong neck and an odd "frog-cat-cow thing" makes an appearance, but Luyken finds a way to turn each one into a success by changing direction or perspective: "The second frog-cat-cow thing made a very nice rock," she writes after inking it in. The idea of setbacks being opportunities in disguise is no stranger to picture book pages, but rarely has it been illuminated with such style, imagination, and compassion. Ages 4–8. Agent: Steven Malk, Writers House. (Apr.) Copyright 2017 Publisher Weekly Annex.

PreS-Gr 3—It starts with a mistake, but page by page, one slightly too large eye, a wonky elbow, and feet a little too far off the ground transform and combine into a larger picture—one that not only is functional but also works perfectly. Illustrations rendered in ink, colored pencil, and watercolor are the focal point. They start small—just a circle, a few lines, a dot on the page, a subtle bit of color here and there—but they slowly grow, flowing across one page and onto the next before reverting back to a smaller image that begins to slowly grow again. Each page shows one small glimpse of the final picture, inviting readers to turn the page to see the rest. The simple text draws readers' attention to the illustrations, and thorough examination is rewarded with playful little details. This is a story about how mistakes can change us all for the better if we are brave enough to face them and march ahead. Readers will love following along as the small spots and smudges on each page change the work in fun and unexpected ways, and even younger readers will finish with fresh optimism and a new idea of what mistakes may become. VERDICT Children, especially fledgling artists, will want to pore over this volume one-on-one. A must-have for every library.—Maggie Mason Smith, Clemson University, SC Copyright 2017 School Library Journal.

The artist demonstates how an initial drawing error can evolve into a colorful work, showing how supposed mistakes can be used as inspiration and be vital to creativity.

"As an artist creatively incorporates her slipups into a drawing, readers see the ways in which 'mistakes' can provide inspiration and opportunity, and reveal that both the art and artist are works-in-progress"--

A celebration of the creative process and the inspiration that can be found in mistakes follows the experiences of an artist who incorporates accidental splotches, spots and misshapen things into her art, transforming it in quirky and playful ways. Simultaneous eBook.

Zoom meets Beautiful Oops! in this memorable picture book debut about the creative process, and the way in which "mistakes" can blossom into inspirationOne eye was bigger than the other.  That was a mistake.The weird  frog-cat-cow thing? It made an excellent bush.And the inky smudges… they look as if they were always meant to be leaves floating gently across the sky.As one artist incorporates accidental splotches, spots, and misshapen things into her art, she transforms her piece in quirky and unexpected ways, taking readers on a journey through her process. Told in minimal, playful text, this story shows readers that even the biggest “mistakes” can be the source of the brightest ideas—and that, at the end of the day, we are all works in progress, too.Fans of Peter Reynolds’s Ish and Patrick McDonnell’s A Perfectly Messed-Up Story will love the funny, poignant, completely unique storytelling of The Book of Mistakes. And, like Oh, The Places You’ll Go!, it makes the perfect graduation gift, encouraging readers to have a positive outlook as they learn to face life’s obstacles.