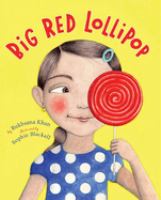 Having to take her younger sister along the first time she is invited to a birthday party spoils Rubina's fun, and later when that sister is asked to a party and baby sister wants to come, Rubina must decide whether to help.

*Starred Review* Siblings everywhere will see themselves in this story, even though it is rooted in the experience of an immigrant family. Rubina is invited to a birthday party, and her little sister Sana screams, I wanna go too! Their mother, Ami, insists that Sana be taken along, despite Rubina's vigorous protests, and the party turns out as badly as Rubina worries it will. To add insult to injury, after eating the lollipop in her goody bag, Sana almost finishes off Rubina's. When Sana comes home with her own invitation to a birthday party, their littlest sister wants to attend, and now it's Sana's turn to protest. But fair is fair, Ami decrees. In a clever turnaround, Rubina, though sorely tempted to let Sana suffer the embarrassment she did, persuades their mother to let Sana go alone. Khan is of Pakistani descent, and this tale of clashing cultural customs is based on an incident from her childhood. The story (and its lesson) comes to life in Blackall's spot-on illustrations, which focus on the family, their expressions, and body language. Though the sisters wear western clothes, Ami dresses in more traditional garb, a subtle reminder of how assimilation is transformed from generation to generation. At its heart, though, this is an honest, even moving, commentary on sisterly relationships, and the final rapprochement is as sweet as the lollipop Sana offers Rubina. Copyright 2010 Booklist Reviews.

Khan (Silly Chicken) delivers another astute and moving story, ostensibly dealing with sibling rivalry, but actually about hard-won lessons emerging from clashes of identity and assimilation. When Rubina receives her first invitation to a birthday party, her mother, who readers are left to infer is an immigrant, is first perplexed ("What's a birthday party?... Why do they do that?"), then insistent that Rubina take her annoying younger sister along, even though Rubina pleads, "They don't do that here!" The result, in Khan's characteristically direct prose, is devastating: "I don't get any invitations for a really long time," says Rubina, and Blackall's (Wombat Walkabout) subtly textured ink portrait shows every nuance of the girl's sense of social failure. But Khan's remarkable gift for balancing emotional honesty and empathy, and her keen understanding of family dynamics, keeps defeatism from swamping the book. Rubina turns her experience into wisdom and gains her mother's respect as a mediator between cultures. It's an ending worthy of a novella, and once again signals that Khan is one of the most original voices working in picture books today. Ages 4–up. (Mar.) [Page 49]. Copyright 2010 Reed Business Information.

Gr 2–4—This sibling-rivalry story compares well with Kevin Henkes's Sheila Rae's Peppermint Stick (HarperCollins, 2001). When Rubina comes home with a birthday-party invitation, her mother asks why people celebrate birthdays, as her culture does not, and insists that Rubina take her little sister along despite the older child's insistence that "they don't do that here." Sana is a brat par excellence at the party and steals Rubina's candy. It's a long time before Rubina is invited to another one. Expert pacing takes readers to the day when Sana is invited to her first party. Whereas the embarrassing scenario could be repeated with the girls' younger sister, Rubina convinces her mother to reconsider, and Sana is allowed to go solo. The beauty of the muted tones and spareness of the illustrations allow readers to feel the small conflicts in the text. The stylistic scattering of East Indian motifs from bedspread designs to clothing communicate the cultural richness of the family's home life while the aerial views, especially the rooms through which the siblings chase each other, are priceless. The book is a thoughtful springboard for discussion of different birthday traditions and gorgeous to the eye.—Sara Lissa Paulson, American Sign Language and English Lower School PS 347, New York City [Page 120]. Copyright 2008 Reed Business Information.

Having to take her younger sister along the first time she is invited to a birthday party spoils Rubina's fun, and later when that sister is asked to a party and baby sister wants to come, Rubina must decide whether to help.

Forced to bring her little sister along to a birthday party, Rubina is mortified when her younger sibling demands to win every game and steals Rubina's red lollipop party favor.

Rubina has been invited to her first birthday party, and her mother, Ami, insists that she bring her little sister along. Rubina is mortified, but she can't convince Ami that you just don't bring your younger sister to your friend's party. So both girls go, and not only does Sana demand to win every game, but after the party she steals Rubina's prized party favor, a red lollipop. What's a fed-up big sister to do?Rukhsana Khan's clever story and Sophie Blackall's irresistible illustrations make for a powerful combination in this fresh and surprising picture book.