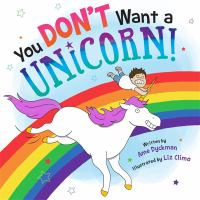 You don't want a unicorn!

"Be careful what you wish for" underpins this comic story of what could happen if one's dearest wish were to come true. In this case, a little boy prepares to wish for a unicorn despite warnings from an unseen narrator. With the plip of the boy'scoin in a fountain, a unicorn with flowing purple hair appears, and mayhem ensues. The narrator's warnings are juxtaposed with illustrations showing the boy and unicorn living in the boy's home. The narrator stresses that, yes, unicorns can fly but, once home, they shed (golden sparkles); scratch (the couch is in tatters); poop (piles of cupcakes); and burp (rainbows). But worst of all, when they get lonely, which they do, they invite their friends over for a raucous unicorn party—"the most destructive force in the universe." The candy-colored illustrations show the damage a roomful of magical party animals can do. Luckily, the wishing fountain is nearby, giving the boy a chance to correct his mistake, though the final illustration shows he may not have learned his lesson. Imaginative fun throughout. Copyright 2017 Booklist Reviews.

Unicorns: splendiferous magical delight or mythological menace? Dyckman (Horrible Bear!) suggests the latter in this cautionary tale. After a boy wearing an "I unicorns" T-shirt tosses a coin into a fountain, a white unicorn with a voluminous purple mane manifests in a shower of rainbows and stars. The boy is delighted, the unseen narrator not so much. "Sure, having a unicorn seems fun—at first," the narrator says. "Fine! It's awesome, okay?!" But this admission is followed by several negatives: unicorns shed, slice furniture to ribbons, and can't be housetrained. Climo (the Rory the Dinosaur books) creates gleeful unicorn havoc in her droll cartoons as the boy's new pet sheds golden sparkles, belches rainbows, and more (readers will never look at cupcakes the same way after the house-training scene). After an ultradestructive unicorn party involving a herd decked out in bows, leg warmers, and sunglasses, the boy learns his lesson (sort of). The ending fizzles, but there's a lot of mischievous fun to be had getting there. Ages 4–8. Author's agent: Scott Treimel, Scott Treimel N.Y. Illustrator's agent: Kathleen Ortiz, New Leaf Literary & Media. (Feb.) Copyright 2016 Publisher Weekly.

A child wishes for a unicorn without knowing how unruly they are as pets.

A young child makes a wish for a unicorn, but when his wish is granted, he discovers that unicorns are unruly and when they get lonely they can call their friends, resulting in an out-of-control unicorn party.

Tossing a coin into a well while wishing for a pet unicorn, a little boy is astonished to discover that unicorns are terrible pets that shed, poke holes in the ceiling and make awful messes. Simultaneous eBook.

Be careful what pet you wish for in this hilarious picture book from bestselling author Ame Dyckman and beloved illustrator Liz Climo. When a little boy throws a coin in a well asking for a pet unicorn, he has no idea what kind of trouble he's in for. Unbeknownst to him, unicorns make the absolutely worst pets: they shed, they poke holes in your ceiling, and they make a big mess. With a knowing wink from Ame Dykeman, creator of Wolfie the Bunny and cheerful illustrations from Rory the Dinosaur creator and Tumblr star Liz Climo, this rollicking story shares all of the ways a pet unicorn can ruin your life, and is sure to have readers in stitches.