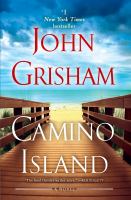 Novelists who write novels about novelists often produce fine work, from literary fiction like Michael Chabon's Wonder Boys through thrillers (Donald E. Westlake's The Hook) and horror (Stephen King's Misery). And now John Grisham, who continues the quality run with this thoroughly entertaining thriller about a novelist who's recruited by a shadowy organization to infiltrate the inner circle of a rare-books dealer and find proof that he's in possession of F. Scott Fitzgerald's handwritten manuscripts, which, in the story, were recently stolen from Princeton University. As Mercer Mann, our hero, gets to know the captivating book dealer Bruce Cable, she runs the risk of falling under his spell and forgetting what she's supposed to be doing. Filled with lively supporting characters (most of whom are writers) and with insider knowledge of the book business, this offers a fascinating take on people who write novels for a living. And it has a genuinely suspenseful plot, too.HIGH-DEMAND BACKSTORY: Approximate number of John Grisham books sold: 300 million. Copyright 2017 Booklist Reviews.

A theft of priceless books from a library, a book dealer who dabbles in the black market of stolen manuscripts, and a novelist who is recruited for a daring mission all add up to what sounds like the ideal beach read. Copyright 2017 Library Journal.

The opening chapters detailing an elaborate scheme to steal five F. Scott Fitzgerald manuscripts from Princeton are the best part of this thriller from bestseller Grisham (The Whistler). A sophisticated gang pulls off the theft after faking a campus shooting that causes widespread panic. The university's insurance company, liable for millions, reaches out to unemployed academic and struggling writer Mercer Mann, who has just lost her position at the University of North Carolina and is in desperate financial straits. Mercer grew up spending summers on Florida's Camino Island, where Donna Watson, the shadowy insurance company representative, believes the stolen manuscripts are; she thinks they're in the possession of Bruce Cable, who runs a successful independent bookstore there. Despite Mercer's initial misgivings about functioning as a spy, she agrees to return to Camino Island and insinuate herself into its literary community as a precursor to gaining Bruce's confidence—and determining whether he has the stolen goods. But after this promising setup, the plot follows predictable lines to a conclusion that genre fans have seen before. Author tour. Agent: David Gernert, Gernert Company. (June) Copyright 2017 Publishers Weekly Annex.

After being laid off from her teaching position, Mercer Mann is approached by a mysterious woman with a generous offer to go undercover and infiltrate bookstore owner Bruce Cable's life to learn his secrets.

#1 NEW YORK TIMES BESTSELLER • “A delightfully lighthearted caper . . . [a] fast-moving, entertaining tale.”—Pittsburgh Post-Gazette A gang of thieves stage a daring heist from a vault deep below Princeton University’s Firestone Library. Their loot is priceless, impossible to resist.         Bruce Cable owns a popular bookstore in the sleepy resort town of Santa Rosa on Camino Island in Florida. He makes his real money, though, as a prominent dealer in rare books. Very few people know that he occasionally dabbles in unsavory ventures.      Mercer Mann is a young novelist with a severe case of writer’s block who has recently been laid off from her teaching position. She is approached by an elegant, mysterious woman working for an even more mysterious company. A generous monetary offer convinces Mercer to go undercover and infiltrate Cable’s circle of literary friends, to get close to the ringleader, to discover his secrets. But soon Mercer learns far too much, and there’s trouble in paradise—as only John Grisham can deliver it.