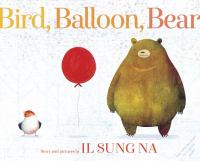 A shy bird wants to become friends with a bear, but the bear already has a friend--a big, red balloon.

It takes courage to make a new friend, especially if your hoped-for friend is already taken. This lovely book dramatizes what loneliness, longing, and happiness look like from the vantage point of a chubby little bird. Bird is new to the forest and hopes Bear will be his friend. However, by the time he works up the nerve to hop over to Bear, a big red balloon floats by, and Bear befriends this silent but intriguing newcomer. Bird sadly watches them play together, but when a wind gust carries the balloon away, Bird flies after it. While the rescue attempt doesn't go as planned, it does cause the two animals to meet, resulting in a friendship marked by dancing, playing, and watching the sunset together. The illustrations, which combine handmade textures with digital layers, are filled with dapples, speckles, swirls, and bursts of color that invite closer looks. This endearing tale contains a meaningful message about how friendship is worth pursuing, even if you feel like a tiny bird confronting a giant bear. Copyright 2017 Booklist Reviews.

Bird is new in the forest and looking for a friend—but he's shy. When he sees Bear, he's overcome with bashfulness (the red plumage on Bird's head gives him something of a permanent blush). With sweet wit, Na (The Opposite Zoo) translates human social awkwardness into the language of forest creatures. Unable to strike up a conversation with Bear, Bird lurks behind a rock, hides in the bushes, then leans oh so casually against a tree, longing to be noticed. The forest's ethereal, lavender trees offer contrast to the tubby shapes of both creatures, and also to a red balloon that floats into sight. Bear is smitten—with the balloon ("The friends spent all their time together. They played. They danced"). Bear isn't spurning Bird when he chooses Balloon; he just noticed Balloon first. It isn't until something happens to Balloon that Bear finally sees Bird. Making friends doesn't involve a magic formula or the right words; sometimes it's just a matter of patience and timing. Any reader who has suffered on the sidelines will feel instant sympathy for Bird. Ages 2–5. (Mar.) Copyright 2016 Publisher Weekly.

PreS-K—Bird looks for a friend on his first day in the new forest. He spies Bear but is too shy to introduce himself. Before he builds up the courage to speak to the stranger, Bear finds a handsome though silent red balloon. Bear's play with Balloon is watched from afar by isolated, lonely Bird. When the wind blows Balloon away, Bird tries to rescue it, but the balloon pops. Bird and Bear now become friends and share great fun. Perspectives change on each spread, as does the placement of figures on the white backgrounds. The result is a dramatic pacing as the tale moves from richly hued spreads to smaller portraits of Bird and Bear on open pages. This simply told tale of unlikely friendships and resilience is as appealing as the creator's Opposite Zoo and Welcome Home Bear. VERDICT A sweet, endearing tale just right for sharing one-on-one or with small groups.—Maria B. Salvadore, formerly at District of Columbia Public Library Copyright 2017 School Library Journal.

A shy bird, wanting to make a friend in his new home, finally musters the courage to say hello to a lonely bear who wants to make friends with a bright, shiny red balloon. By the creator of The Opposite Zoo. Simultaneous eBook.

A shy bird wants to become friends with a bear, but the bear already has a friend--a big, red balloon.

A fresh and heartwarming new story from Il Sung Na about finding the courage to make a friend.  Bird is new to the forest, and he’s looking for a friend. Bear could use a friend, too. But Bird is too shy to introduce himself. Just as he musters the courage to say hello . . . it’s too late! Bear has already found a friend: a bright, shiny red balloon.   Has Bird missed his chance?   From the acclaimed Il Sung Na comes a charming and beautifully illustrated story about courage, kindness, and friendship.Peek inside the jacket for a special poster! Praise for Il Sung Na:  "Na brings fresh energy to the familiar. With a coloring style that feels as if someone took a firecracker to a box of crayons, Na makes turtle shells as dynamic as a peacock's plumage." --The New York Times (The Opposite Zoo) “Il Sung Na’s illustrative art is so joyous, so jubilantly colorful, it feels celebratory and poetic even when the story is simple and spare.” —The Boston Globe (A Book of Babies)? “[A] grand read-aloud.” —Kirkus Reviews, Starred (Welcome Home, Bear)   ? "It’s the rare picture book that, upon arrival, feels as though it has been around for years already; Na’s belongs to this group.” —Publishers Weekly, Starred (A Book of Sleep)? "Vibrant [and] whimsical.” —School Library Journal, Starred (Snow Rabbit, Spring Rabbit)From the Hardcover edition.