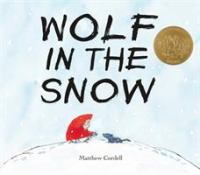 Wolf in the snow

When a wolf cub and little girl are lost in a snowstorm they must find their way home.

*Starred Review* In parallel opening spreads, a little girl says good-bye to her parents and dog as she heads off to school, and a wolf cub ranges across the field with his pack. At day's end, the girl, wearing a bright red coat and hood (catch that allusion!), heads home as snow begins to fall. The snow thickens across the subsequent pages, and soon she is lost, just as the wolf cub is separated from his pack in the storm. A chance encounter leads to a moment of solidarity: when the wolf cub sinks in the snow, the girl scoops him up, carrying him towards the distant howls of his family. He's home safe, but she's still lost—until the wolves, realizing a debt is owed, return for her, and their howls bring her own family. This nearly wordless picture book is a tender, never precious story of kindness and cooperation. The ink-and-watercolor illustrations, though simple, are packed with emotion, while the minimal text relays only sounds: the distant howls of the wolves, the whines of the wolf cub, the girl's huffs of breath as she struggles through the snow. Cordell's wolves aren't cuddly cartoons by any means, but neither are they monsters; instead, they're realistically depicted wild animals who inherently understand loyalty. Expect this wintry tale to bring only warmth. Copyright 2016 Booklist Reviews.

Caught in a blizzard on her way home from school, a girl in a red parka discovers a wolf pup left behind by its pack. Cordell's story is wordless, but there's a soundtrack: the cub whines, and distant howls reveal the pack's presence over the next hill. The snow is deep, and the girl is tired, but she puts the pup first, scooping it up and heading toward the howls, undaunted by frightening encounters along the way. Cordell (Leaps and Bounce) uses his customary light and loopy scrawl for the girl, but the bristling fur and open mouths of the wolves are startlingly real. The mother wolf comes to meet them: her golden eyes blaze, and she growls softly. But she's grateful, and when the girl collapses going home, the pack shows its gratitude in an unexpected way. Cozy vignettes, framed in rough circles, help reassure readers that the story will end well, and so does a tender opening portrait of the family. The girl's story is a hero's journey, and Cordell tells it with skill and heart. Ages 2–6. Agent: Rosemary Stimola, Stimola Literary Studio. (Jan.) Copyright 2016 Publisher Weekly.

K-Gr 2—In this mostly wordless picture book, a girl gets lost in a snowstorm while walking home from school. At the same time, a wolf pup gets separated from its pack. The girl discovers the pup and carries it through dangerous and icy terrain to reconnect with its pack, and the wolves assist the girl by howling to attract her searching family. Cordell's artistic approach is a little more free-form than in his past titles. It works well in depicting the twisting trees in the snowstorm but is more challenging to pull off with the characterization of the girl. Yet he succeeds. Only her eyes are visible in her large red triangular parka, with a scarf across her mouth and nose, as she trudges through the snow; there is so much emotion in her eyes that viewers know all that they need to know about this almost comically bundled, shapeless figure. Cordell's landscapes do a wonderful job showing the vastness and desperation of the girl's journey, his blended watercolors of the snow and trees adding eloquence to the experience. VERDICT A heartwarming adventure about helping others, best shared one-on-one to pore over the engaging images.—Peter Blenski, Greenfield Public Library, WI Copyright 2016 School Library Journal.

When a wolf cub and little girl are lost in a snowstorm they must find their way home.

Matthew Cordell delivers his most beautiful picture book to date in this tale of a girl who finds a wolf cub lost in the snow.

Winner of the 2018 Caldecott MedalA girl is lost in a snowstorm. A wolf cub is lost, too. How will they find their way home?Paintings rich with feeling tell this satisfying story of friendship and trust. Wolf in the Snow is a book set on a wintry night that will spark imaginations and warm hearts, from Matthew Cordell, author of Trouble Gum and Another Brother.