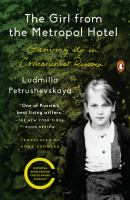 The girl from the Metropol Hotel Growing up in communist Russia

"The prizewinning memoir of one of the world's great writers, about coming of age and finding her voice amid the hardships of Stalinist Russia. Like a young Edith Piaf, wandering the streets singing for alms, and like Oliver Twist, living by his wits, Ludmilla Petrushevskaya grew up watchful and hungry, a diminutive figure far removed from the heights she would attain as an internationally celebrated writer. In The Girl from the Metropol Hotel, her prizewinning memoir, she recounts her... childhood of extreme deprivation, made more acute by the awareness that her family of Bolshevik intellectuals, now reduced to waiting in bread lines, once lived large across the street from the Kremlin in the opulent Metropol Hotel. As she unravels the threads of her itinerant upbringing--of feigned orphandom, of sleeping in freight cars and beneath the kitchen tables of communal apartments, of the fugitive pleasures of scraps of food--we see, both in her remarkable lack of self-pity and in the more than two dozen photographs throughout the text, her feral instinct and the crucible in which her gift for giving voice to a nation of survivors was forged"--

In times of extreme deprivation, the small symbols of normalcy we hold close to ourselves give us the strength to carry on. Petrushevskaya (There Once Lived a Mother Who Loved Her Children until They Moved Back In, 2014) drives home this point eloquently in her moving memoir. The daughter of Russian intelligentsia, she was forced to flee with her family from Moscow's elite Metropol Hotel to distant Kuibyshev in a cattle car as the storm clouds of WWII grew ever darker. Foraging in trash for cabbage leaves to make soup and skipping school because she had no shoes, Petrushevskaya still longed for a doll she could call her own, an object that could tether her to some sense of comfort amid all the starkness. Through such fragmented episodes, Petrushevskaya succeeds in showing just how off-the-bell-curve her extraordinary life has been. That she grew up to be a gifted writer, learning to read from newspapers left in the trash, is proof that the brightest, most fiery diamonds are forged under extreme pressure. Copyright 2017 Booklist Reviews.

Originally published in Russian in 2006, this is the first volume of Petrushevskaya's autobiography. Acclaimed in the United States for her fablelike short stories, here the author (There Once Lived a Woman Who Tried To Kill Her Neighbor's Baby: Scary Fairy Tales; He Hanged Himself: Love Stories) turns her darkly comic sensibility on the early, and quite unhappy, years of her own life. Many of the chapters are very short and disconnected from one another, and in a few instances, Petrushevskaya slips into the third person, which brings the reader back to the feel of her short stories. The most intriguing final section describes her experience doing menial labor and working for a radio station in Kazakhstan. Otherwise, the book adds little to the "miserable childhood" subgenre of memoir. VERDICT For readers already familiar with Petrushevskaya, this will be a welcome addition. Others may want to turn to her fiction first.—Derek Sanderson, Mount Saint Mary Coll. Lib., Newburgh, NY (c) Copyright 2016. Library Journals LLC, a wholly owned subsidiary of Media Source, Inc. No redistribution permitted.

In this memoir, acclaimed novelist Petrushevskaya (There Once Lived a Woman Who Tried to Kill Her Neighbor's Baby) recounts her impoverished Moscow childhood with a blend of dark humor and clipped, piercing realism. She was born in 1938 to a family of Bolshevik intellectuals who lived in Moscow's preeminent Metropol Hotel. Petrushevskaya, along with her mother, aunt, and grandmother, soon had to flee the city for Kuibyshev in 1941, when the family was deemed "enemies of the people." Leaving Moscow on a cattle car at the start of the war was downright luxurious compared to the near-starvation that Petrushevskaya and her family suffered for years to come, with Petrushevskaya taking to begging on the street, often pretending to be an orphan or disabled. But despite the hardships she endured, her impish spirit flourished and she ran around the streets, shoeless but never beaten down. After returning to Moscow at age nine, a wild child, she was sent to a series of summer camps in an effort to civilize her (they were not entirely successful); despite mediocre grades in college, she still managed to squeak by with a degree in journalism. The definition of incorrigible and indomitable, both on the page and in her life, Petrushevskaya shows that even in the harshest of circumstances, spirited determination can prevail. (Feb.) Copyright 2016 Publisher Weekly.

Recounts the author's childhood in poverty in Soviet Moscow, discussing her family's former successes as Bolshevik intellectuals living in the opulent Metropol Hotel.

A memoir from the best-selling and award-winning Russian author, describes waiting in bread lines with her Bolshevik family who once lived across the street from the Kremlin and being raised by her aunt and grandmother after her mother left. Original.

Finalist for the National Book Critics Circle Award for AutobiographyThe prizewinning memoir of one of the world’s great writers, about coming of age as an enemy of the people and finding her voice in Stalinist Russia   Born across the street from the Kremlin in the opulent Metropol Hotel—the setting of the New York Times bestselling novel A Gentleman in Moscow by Amor Towles—Ludmilla Petrushevskaya grew up in a family of Bolshevik intellectuals who were reduced in the wake of the Russian Revolution to waiting in bread lines. In The Girl from the Metropol Hotel, her prizewinning memoir, she recounts her childhood of extreme deprivation—of wandering the streets like a young Edith Piaf, singing for alms, and living by her wits like Oliver Twist, a diminutive figure far removed from the heights she would attain as an internationally celebrated writer. As she unravels the threads of her itinerant upbringing—of feigned orphandom, of sleeping in freight cars and beneath the dining tables of communal apartments, of the fugitive pleasures of scraps of food—we see, both in her remarkable lack of self-pity and in the two dozen photographs throughout the text, her feral instinct and the crucible in which her gift for giving voice to a nation of survivors was forged.“From heartrending facts Petrushevskaya concocts a humorous and lyrical account of the toughest childhood and youth imaginable. . . . It [belongs] alongside the classic stories of humanity’s beloved plucky child heroes: Edith Piaf, Charlie Chaplin, the Artful Dodger, Gavroche, David Copperfield. . . . The child is irresistible and so is the adult narrator who creates a poignant portrait from the rags and riches of her memory.” —Anna Summers, from the Introduction