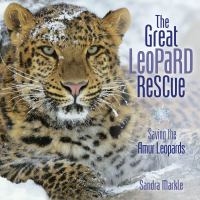 "Amur leopards are the rarest big cats in the world. But thanks to scientists' new, innovative efforts to study them and breed a reserve population, these majestic cats have a chance to come back."--

Similar in approach to Markle's The Great Monkey Rescue (2015), this handsome volume looks at efforts to rescue the Amur leopard. Called "the rarest big cats on Earth," these leopards live in the Asian taiga, west of Vladivostok. Their numbers have dwindled from around 2,400 in the wild during the 1950s to about 30 in 2007 and 50 today, because of disease, poaching, and significant loss of habitat when land was cleared for farming, logging, and mining. The discussion includes several practical, international efforts during the past 16 years to protect the Amur leopard, as well as an innovative plan for the future. Based on interviews with zoologists working in this field, the well-organized, cogently written text is enhanced by the many excellent photos, from shots of drones and firefighters protecting Russia's Land of the Leopard National Park (created in 2012) to close-ups of a leopard hunting and two cubs at play. An informative presentation showing what is being done to save this beautiful but critically endangered species. Copyright 2014 Booklist Reviews.

Gr 3–6—Amur leopards, native to eastern Russia and parts of northern China, are at risk of becoming extinct. Markle, a former science teacher, was inspired to write this work after learning about the dire state of these creatures. The narrative begins from the perspective of a young male Amur leopard on the hunt for his next meal. Markle segues into a brief history of these once well-established big cats and emphasizes the importance of their natural habitat, the taiga (a type of high-altitude forest), to their survival. Large-scale deforestation, made possible by advances in farming technology in the 1950s, began a chain of events (after the lumber industry cut down much of the taiga, the mining industry came in) that would push the Amur leopards to the brink of existence. The text then goes on to thoroughly cover the ways in which scientists, zookeepers, antipoaching teams, and other groups like the Amur Leopard and Tiger Alliance (ALTA) are working to protect and reestablish Amur leopard populations. In the end, the author returns to the young male from the beginning, only to reveal that the Phoenix Fund, part of ALTA, has been watching over him the whole time. Clear, beautiful photos will keep readers turning the pages, while maps, sidebars, and the main text keep them informed. VERDICT Libraries will definitely want to add this title for all of their animal-loving patrons, especially those with an interest in conservation efforts.—Jennifer Pope, La Grange Independent School District, TX [Page 124]. (c) Copyright 2016 Library Journals LLC, a wholly owned subsidiary of Media Source, Inc. No redistribution permitted.

In 2007 only thirty Amur leopards remained in the wild. Scientists knew they needed to do more to help these big cats. However, details of the leopards' wild lives in their high-altitude forest home were still a mystery. With the help of new technology and the cooperation of scientists and governments around the world, people have learned more than ever before about these rare cats. An innovative plan is under way to give Amur leopards a more secure future. Can these cats rebound from the brink before it's too late?

Describes the endangered species of Amur leopards and the innovative efforts to study them and breed a reserve population.

"Amur leopards are the rarest big cats in the world. But thanks to scientists' new, innovative efforts to study them and breed a reserve population, these majestic cats have a chance to come back."--