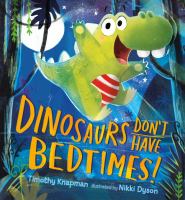 A mom indulges her exuberant dinosaur son's fantasy play while gently steering him toward bedtime.

Though his inhumanly patient (and single, apparently) mom announces that it's dinnertime, bathtime, and bedtime, Mo, an overstimulated lad wearing clawed slippers and a homemade dino hat, bellows that dinosaurs play rough, hate baths, and eat whenever they like. Though parents and other adult readers will wince—both at Mo's volume and, in the cartoon illustrations, at the way he smears up the walls (as mommy looks on smiling), dashes soapy and naked away from the tub, and moons some pretend prehistoric playmates in an imagined scene—younger audiences will doubtless roar right along. The brightly colored digital illustrations in a fun cartoon-style keep things from getting too out of hand, and Knapman slips occasional alliteration and rhyme into the exchanges ("Towel!" "GROWL!") to create a read-aloud-friendly cadence. The rampage comes to a suitable end with a "pretend" snuggle and a good-night kiss: "Roar! Roar! Snore . . ." When Bob Shea's Dinosaur vs. Bedtime (2008) begins to pall, here's an even wilder rumpus. Copyright 2016 Booklist Reviews.

PreS-Gr 1—Mo is a little boy who loves dinosaurs. Everything about him screams "dinosaur." He plays with toy dinosaurs. His clothes, towels, and pajamas are covered with pictures of dinosaurs. He even eats and acts like a dinosaur. Mo also has a vivid imagination and would rather play than do some of the things his mother would like him to do. Mo claims dinosaurs don't have dinnertime, bath time, or bedtime. He informs his mother that dinosaurs do not clean their claws or put toothpaste on their jaws. He likes to tell her how they hide in the jungle and don't play nice. His mother is very patient and gently guides him in the right direction. Even though he doesn't want to admit that he's hungry and sleepy, Mo does eat his dinner and gets ready for bed. This is a story that takes listeners inside Mo's imagination. Viewers see him as a little boy and as a silly dinosaur. The illustrations are large and colorful. The text is strategically placed so that the illustrations are the focal point. The dinosaurs and their foolish antics will delight young listeners. This book does provide some teachable lessons about the best way to act. VERDICT A roaring good read-aloud for dinosaur lovers and parents who have little ones like Mo.—Barbara Spiri, Southborough Library, MA. Copyright 2016 School Library Journal.

A mom indulges her exuberant dinosaur son's fantasy play while gently steering him toward bedtime, in a raucous ode to imagination that combines high-energy illustrations with stomping and roaring text. By the author of Superhero Dad.

A mom indulges her son’s fantasy play while gently steering him toward bedtime in a raucous ode to imagination.

“Dinnertime!” calls Mommy. Well, dinosaurs don’t have dinnertimes! They eat whatever they like (gobble, crunch!), make a dreadful mess, and hate to take baths and wear pajamas (where would their tails go?). Dinosaurs are much too big to play nicely—they rampage and stomp around and knock things down! But maybe they’d listen to a bedtime story, if it’s ROARY. . . . With exuberant illustrations merging bedtime routines with a little boy’s fantasy world—and showing Mom’s role in both—this ode to dinosaurs, wild imaginations, and cleverly won bedtime snuggles is sure to get roars of approval from kids and parents alike.