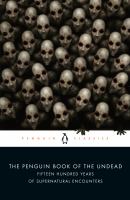 Humanity's enduring fascination with the supernatural is explored in this collection of writings compiled by medievalist Bruce (history, Univ. of Colorado; Cluny and the Muslims of La Garde-Freinet). Set down by theologians, scholars, and playwrights, these tales of encounters between the living and the restless dead date from antiquity to the early modern period and are placed in their proper historical and cultural context by Bruce's introductions to both individual pieces and the eras in which they were penned. Although the tone is inevitably more scholarly than shocking, it succeeds well as an education in how stories of wandering spirits have reflected throughout history common human anxieties about death, the disposal of mortal remains, and the fate of the soul. The selected excerpts illustrate how these fears have changed through the ages and the ways in which otherworldly accounts have been used to address them. VERDICT Recommended for readers interested in the supernatural, its religious and cultural influences, and depiction in the medieval era.—Sara Shreve, Newton, KS. Copyright 2016 Library Journal.

Spanning the years between the writing of Homer's Odyssey (ca. 700 B.C.E.) and Shakespeare's Hamlet (ca. 1599 C.E.), the contents of this exceptionally well-curated compilation show that the wide variety of accounts of the undead have been rampant in literature long before the Gothic era. Pliny the Younger, in a letter from the first century C.E., reports the exorcism of a chain-rattling ghost by interring the deceased's unburied remains. William of Newburgh, writing in the 13th century C.E., relates tales of rampaging revenants who can only be disposed of through the decapitation and evisceration of their corpses. In the book's grimmest account, the first-century C.E. poet Lucan writes about a necromancer who reanimates a soldier's corpse to foretell the future. Bruce has chosen selections from numerous cultures, including ancient Greece, Anglo-Norman England, and medieval Scandinavia, with an emphasis on ecclesiastical writings whose frights served morally instructive purposes. His approach is scholarly, but he presents the contents with an enthusiasm that makes these mostly obscure works accessible to the casual reader. (Oct.) [Page ]. Copyright 2016 PWxyz LLC

Offers an anthology of writings on ghosts, zombies, vampires, and other undead in diverse forms covering 1,500 years of pre-modern literature.

The dead rise again in a spine-tingling collection of ghostly visitations through the ages, recorded in historical narratives, theological texts and personal letters from more than 1,500 years, showing the evolution of our thinking about zombies and other restless souls. Original.

The walking dead from 15 centuries haunt this compendium of ghostly visitations through the ages, exploring the history of our fascination with zombies and other restless souls.   Since ancient times, accounts of supernatural activity have mystified us. Ghost stories as we know them did not develop until the late nineteenth century, but the restless dead haunted the premodern imagination in many forms, as recorded in historical narratives, theological texts, and personal letters. The Penguin Book of the Undead teems with roving hordes of dead warriors, corpses trailed by packs of barking dogs, moaning phantoms haunting deserted ruins, evil spirits emerging from burning carcasses in the form of crows, and zombies with pestilential breath. Spanning from the Hebrew scriptures to the Roman Empire, the Scandinavian sagas to medieval Europe, the Protestant Reformation to the Renaissance, this beguiling array of accounts charts our relationship with spirits and apparitions, wraiths and demons over fifteen hundred years, showing the evolution in our thinking about the ability of dead souls to return to the realm of the living—and to warn us about what awaits us in the afterlife.For more than seventy years, Penguin has been the leading publisher of classic literature in the English-speaking world. With more than 1,700 titles, Penguin Classics represents a global bookshelf of the best works throughout history and across genres and disciplines. Readers trust the series to provide authoritative texts enhanced by introductions and notes by distinguished scholars and contemporary authors, as well as up-to-date translations by award-winning translators.