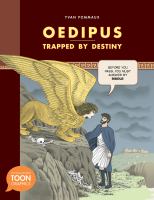 "Oedipus is born to a terrible fate. Can he escape it to save himself and his family? An oracle makes a ghastly prediction: the young prince will kill his father and marry his mother. Horrified, King Laius decides to kill his infant son before he can ever grow up to fulfill that prophecy. But destiny can't be avoided so easily."--Publisher.

Oedipus is the latest Greek myth to get graphic-novel treatment for younger readers. As with other books in Pommaux's series, the myth is distilled to the barest essentials for a simple, uncluttered story in which the illustrations play a key role in storytelling. Readers follow King Laius as he orders his newborn son, Oedipus, to be killed in order to avoid a tragic prophecy, only to realize that, despite all calculations, the oracle's predictions cannot be avoided. Short narrative paragraphs and cartoon bubble dialogue convey key elements of the myth, complete with footnotes to assist with pronunciation. The author makes excellent use of the large-size, full-color illustrations to bring interest to the pages, though the characters are occasionally flat and expressionless, which dampens the tension. A list of characters and an index, both illustrated, provide additional context, as does an author's note. While this effectively teaches the basic elements of the story in a digestible format, George O'Connor's Olympians series might offer a more inviting package for readers hungry for more Greek mythology. Copyright 2014 Booklist Reviews.

Gr 5–8—A succinct retelling of the Greek tragedy of Oedipus, the king who fulfilled the prophecy that he would kill his father and marry his mother, this title provides the basic facts of the story. Rendered in muted, somber tones, the illustrations emphasize backgrounds. Characters, on the other hand, are small, as if dwarfed by events beyond their control. The layout is a combination of spreads and panels. Some of the text appears in cartoon bubbles, but most of it is in narrative format and is occasionally presented at the very top or bottom of the page, where readers might overlook it. Pronunciations for names are also provided at the bottom, which can make following the tale confusing at times. The opening endpapers reveal a map of Greece that shows the locations of various events and an inset of a Greek drinking cup depicting Oedipus with the Sphinx. The closing endpapers include an illustrated index for characters and locations, providing more information on each. This is a solid introduction to a Greek classic, but the even tone undermines the horror of the tragedy. VERDICT A good addition for schools with a focus on classics but not captivating enough to capture the interest of Rick Riordan readers.—Jaclyn Anderson, Madison County Library System, MS [Page 186]. (c) Copyright 2016 Library Journals LLC, a wholly owned subsidiary of Media Source, Inc. No redistribution permitted.

A sumptuous graphic novel adaptation of the classic Greek myth, complemented by strikingly detailed artwork, follows the experiences of a beloved young king who discovers how he was abandoned as a child in order to avoid a terrible fate that, regardless, ends up coming to fruition.

Retells the story of Oedipus, who unwittingly kills his father, marries his mother, and brings disaster to himself, his family, and his city.

Oedipus is born to a terrible fate. Can he escape it to save himself and his family? An oracle makes a ghastly prediction: the young prince will kill his father and marry his mother. Horrified, King Laius decides to kill his infant son before he can ever grow up to fulfill that prophecy. But destiny can't be avoided so easily. That child is Oedipus, who lives to lead a country. Discover his true family, and see how his own rash actions have only furthered the gods' plans. With unique flair and a wealth of details, cartoonist Yvan Pommaux brings to a new generation the tragic tale, which has thrilled and terrified us for thousands of years. A must to nourish young readers' imaginations.

Yvan Pommaux is a beloved children's book author in France who is known for his detailed research and illustration style. In 1995, he was awarded the prestigious Grand Prix de la Ville de Paris. Three schools have been named after him as a testament to the joy and educational appeal of his work for children.