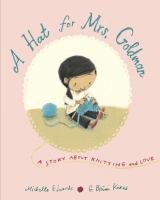 A hat for Mrs. Goldman A story about knitting and love

*Starred Review* Sophie lives next door to passionate knitter Mrs. Goldman, who makes hats for tiny babies, older folks, friends, and family—and Sophie. Mrs. Goldman has taught Sophie how to knit, too, so she can make hats to give away as a good deed. "Keeping keppies warm is our mitzvah." But knitting is hard, so Sophie sticks to her favorite part of the process, making pom-poms as hat toppers. When Sophie notices that Mrs. Goldman has no hat and learns she's given it away, she picks up her needles again to make sure that Mrs. Goldman can keep her own keppie warm. She's tempted to quit, but after heading out into whipping winds with the hatless Mrs. Goldman, she chooses to keep trying. Finally, the hat is finished, but as Sophie turns it over and sees its many holes, she doesn't know if it's worth giving, until she comes up with a pom-pom-infused idea. Though the weather outside is cold, this story overflows with warmth. Sympathy, empathy, and love all wind together in a text featuring a determined young heroine and in thoughtful mixed-media art. One page is full of images of Sophie at work, another a blurry scene in the snow; both set the mood. A lovely book to share and discuss, and the hat pattern is included! Copyright 2016 Booklist Reviews.

Sophia notices that Mrs. Goldman knits hats for everyone in the neighborhood and never thinks of herself. "Where's your hat?" Sophia asks when they're out on an icy day walking Mrs. Goldman's dog. "I gave it to Mrs. Chen," the woman replies. Sophia prefers making the pom-poms that adorn Mrs. Goldman's hats to knitting anything herself, but she decides to make Mrs. Goldman "the most special hat in the world." In a series of captivating spot illustrations, Karas (Make Way for Readers) shows Sophia hard at work, her dot eyes intently focused on the yarn. But Sophia's knitting leaves much to be desired. Can this token of love be saved? It's a supremely lovely story, a tribute to the rewards of grit and selflessness; Edwards's (Max Makes a Cake) unadorned, emotionally genuine text is as winning as the pictures. Readers will be able to add two words from Jewish culture to their vocabularies—keppie and mitzvah—and there's one more word that fits both Sophia and Mrs. Goldman to a tee: mensch. Ages 4–8. Author's agent: Lori Kilkelly, Rodeen Literary Management. Illustrator's agent: Brenda Bowen, Sanford J. Greenburger Associates. (Oct.) [Page ]. Copyright 2016 PWxyz LLC

PreS-Gr 2—Mrs. Goldman is a knitter, and she uses her talents to show love and affection for everyone in her neighborhood by making them all hats. Sophia receives her first hat from Mrs. Goldman when she is a tiny baby, and she grows up to spend time helping Mrs. Goldman add the finishing touches to her knitted hats by making pom-poms. During a cold prewinter walk, Sophia notices that Mrs. Goldman's head is bare because she spends all of her time knitting for others. Sophia makes it her mitzvah (good deed, as Mrs. Goldman taught her) to use her limited knitting skills to make Mrs. Goldman a hat. Sophia works hard but finds that her finished product has a few holes in it. Feeling discouraged for a moment, the child remembers Mrs. Goldman's praise of her pom-poms, and she adds red pom-poms to any areas that are bare; Mrs. Goldman is delighted. Mixed-media illustrations showcase the research the illustrator put into learning how to knit to faithfully execute the artwork. Soft lines and muted color choices give the illustrations a look that perfectly complements the art form. Back matter includes a pattern for making a knitted hat and instructions for making pom-poms. The hat pattern does require adult assistance and a basic working knowledge of knitting, though the pom-poms could easily be accomplished by a novice. VERDICT This heartwarming offering achieves its emotional impact through the loving actions of its main characters and makes for a great read-aloud whether shared one-on-one or with a group in storytime.—Samantha Lumetta, Public Library of Cincinnati and Hamilton County, OH. Copyright 2016 School Library Journal.

Making pom-poms to help Mrs. Goldman, who knits hats for everyone in the community, little Sophia is challenged to overcome her own limited crafting abilities when she discovers that Mrs. Goldman does not have a hat of her own. By the author of Room for the Baby. Simultaneous eBook.

This heartwarming winter story is perfect for those who love to knit and parents looking to teach their children about the importance of doing good for others! Mrs. Goldman always knits hats for everyone in the neighborhood, and Sophia, who thinks knitting is too hard, helps by making the pom-poms. But now winter is here, and Mrs. Goldman herself doesn't have a hat-she's too busy making hats for everyone else! It's up to Sophia to buckle down and knit a hat for Mrs. Goldman. But try as Sophia might, the hat turns out lumpy, the stitches aren't even, and there are holes where there shouldn't be holes. Sophia is devastated until she gets an idea that will make Mrs. Goldman's hat the most wonderful of all. Readers both young and old will relate to Sophia's frustrations, as well as her delight in making something special for someone she loves. A knitting pattern is included in the back of the book. "[A] celebration of winter mitzvahs, or kind deeds. Karas's adorable, radiant art adds to the heartwarming mood."--The New York Times