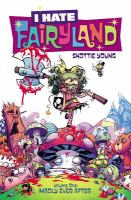 "Join Gert, a grown-up in a six-year-old girl's body, who had been stuck in the magical world of Fairyland for nearly thirty years on a maddening quest to return home. It's just her, a fly named Larry, and a battle-axe, against Slug Lords, Mushroom Men, Zombie Fauns, Barbarians, her nemesis, Queen Cloudia, and even more insanity!"--Back cover of Volume 1.

Sucked into a magical world where anything is possible, a young girl must go on an enchanted quest to find a magic key that can send her home. That was 27 years ago, and Gertrude is still stuck in Fairyland. Though she hasn't aged physically, she's gone loopy from eating nothing but sugar and interacting with talking bunnies. Jaded and deranged, she's now more interested in getting drunk and swinging a battle axe than going on magical quests. Though the story is pretty one-note, focused on slaughtering as many magical beings as possible, and Gert's constant swearing and crazed demeanor can become grating, comics fans looking for gore and absurd, dark humor will follow her to hell and back. Young's fantastic art style is hugely appealing. His character design is very imaginative, with exaggerated figures and stylized shapes, and it's a perfect mix of cute and fluffy and disturbing and grotesque. The candy colors pop on every page, further adding to the contrast of sweet and salty. Fans of off-color, weird humor will be devilishly delighted. Copyright 2016 Booklist Reviews.

From superstar writer and artist Skottie Young (Rocket Raccoon, Wizard ofOZ, Fortunately, The Milk), comes the first volume of an all-new series ofadventure and mayhem.An Adventure Time/Alice in Wonderland-style epicthat smashes it's cute little face against grown-up, Tank Girl/Deadpool-esqueviolent madness. Follow Gert, a forty year old woman stuck in a six year oldsbody who has been stuck in the magical world of Fairyland for nearly thirtyyears. Join her and her giant battle-axe on a delightfully blood soaked journeyto see who will survive the girl who HATES FAIRYLAND.Collecting Issues#1-5 for only $9.99. "Skottie Young is an Eisner Award-Winning, New York TimesBestselling cartoonist who has been making comics and children's books for overfifteen years. Books such as Rocket Raccoon, the Wizard of Oz graphic novels,Little Marvel and Fortunately, The Milk have made him a fan favorite,critically-aclaimed writer and artist.Jean-Francios Beaulieu is thecolorist behind the award-winning Wizard of OZ graphic graphic novels and hasworked with Skottie Young for over ten years. Nate Piekos is anaward-winning letter and designer who has created some of the industry's mostpopular fons and has used them to letter comic books for Marvel, DC, Oni Press,Dark Horse and many more."