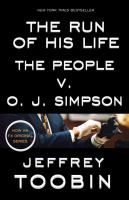 The run of his life The people v. O.J. Simpson

"First published less than a year after the infamous verdict, Jeffrey Toobin's nonfiction masterpiece tells the whole story, from the murders of Niclole Brown Simpson and Ronald Goldman to the ruthless gamesmanship behind the scenes of 'the trial of the century."--Back cover.