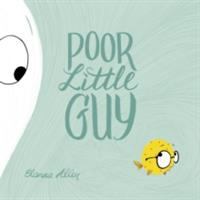 A little, bespectacled, bright yellow fish pops dramatically against a background made primarily of pale green swirls. A single large eye observes him from the other side of a double-page spread. Nothing happens. "Phew," thinks the little fish, until a suckered tentacle scoops him up. "Hello, little guy!" says the octopus, juggling the fish from one long arm to another. "I bet you even taste cute." After several rounds of games to whet his appetite, the octopus pops his newfound snack into his mouth. It seems like it's lights out for the little fish, but he may have a few tricks up his sleeve. "Poor little guy," the fish thinks as he makes his escape, only to swim directly towards a shark. Clever endpapers will reassure readers concerned about the fish's safety, and this expressive, darkly funny picture book is sure to amuse kids and parents alike—and maybe reinforce that it's a bad idea to play with your food. Suggest to fans of Jon Klassen's This Is Not My Hat (2012). Copyright 2014 Booklist Reviews.

The ocean can be a tough place, and Allen's eponymous hero, a diminutive bespectacled fish that resembles a tennis ball with fins, has found himself in the path of an octopus so huge that even the margins of the page can't contain him. Worse, Octopus uses his tentacles to toy with Little Guy, creating a maze, a cage, and then—in a move that should vanquish any ideas that Octopus is just a genial galoot—a serving platter. But when the right moment presents itself, Little Guy reveals that he's actually a very prickly puffer fish, turning the tables—and the title—on his bully. Allen (the Eva and Sadie books) renders the ocean in pale swirls of green and blue that create a powerful sense of underwater movement; her calligraphic hand-lettered text swims in and around the action. Though figuring out where to focus takes a little work, if readers keep their eye on Little Guy, they'll be rewarded with a clever and visually striking tale that proves revenge is a dish best served wet. Ages 3–5. Agent: Julie Kane Ritsch, Gotham Group. (June) [Page ]. Copyright 2016 PWxyz LLC

K-Gr 2—There is always a larger fish in the sea. And sometimes that larger fish can be a little…insensitive. A small yellow fish, sporting stylish spectacles, is swimming through the ocean, minding his own business, when he is grabbed by a much larger octopus. The fish swims a little faster, hoping he can escape, but the octopus reaches out one sinuous tentacle and drags him back to "play." The octopus's play is rough and inconsiderate—he flings the little yellow fish from tentacle to tentacle, shouting, "Catch of the Day!," among other tricks that the octopus finds hilarious and the little yellow fish finds terrifying. The octopus gets wilder and wilder until he finally decides he might swallow the fish. When he tries to do so, he gets a big surprise. That little yellow fish is a puffer and leaves the octopus with spines in his mouth. This book has very few words, so the illustrations take center stage. Allen uses a variety of perspectives to convey feelings, both those of the little fish and the boisterous octopus. Readers will feel a wide range of emotions—fear, annoyance, frustration, and, finally, vindication. There is a gorgeous palette here, too, atmospheric and full of motion. VERDICT The large, clear images will show up well in a storytime, and the surprise ending will have readers going back again and again to see the octopus's reaction. The term poor little guy is relative.—Susan E. Murray, formerly at Glendale Public Library, AZ [Page 67]. (c) Copyright 2016 Library Journals LLC, a wholly owned subsidiary of Media Source, Inc. No redistribution permitted.

When an octopus chooses to pick on a tiny fish in the ocean, he's in for a big surprise.

A sweet and cute little blowfish, who may not be as innocent as he seems, reveals a surprising quality that helps him defend against ocean predators who think he might make a tasty snack.

With the cheeky twist of Jon Klassen's This Is Not My Hat and the graphic appeal of Mo Willems, Poor Little Guy will leave kids giggling'and begging for rereads! What do you do when you're so tiny that the bigger ocean creatures think you might even taste adorable? An itsy-bitsy, glasses-wearing fish is minding his own business when a playful (and hungry) octopus snatches him right up. Luckily, this poor little guy is not quite as innocent as he seems'and he has a BIG surprise up his sleeve! Told with wit, a wink, and a delightfully dark sense of humor, Poor Little Guy celebrates the very smallest...and all of their giant victories. Hand this cute but mighty book to fans of Bob Shea and Dan Krall.