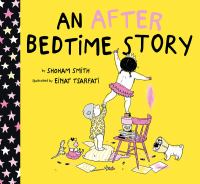 An after bedtime story

After bedtime Little Nina refuses to go to sleep and gets into mischief while guests are visiting.

When the usual bedtime fare doesn't induce slumber, why not try an after-bedtime tale? Every parent will instantly recognize the angelic-toddler-turned-truculent-terror for whom sleep is just not a priority. Tonight, adorable, tiara-wearing Nina can't sleep, not when there's a party going on in her own house. Who can resist Aunt Ruth's hugs and Uncle Saul's pony rides? How can anyone pass up that dessert-laden cart? And as long as the baby brother has gotten up, too, everyone might as well party hearty! Translator Appel deserves kudos for managing to replicate the energetic rhyming verse of Israeli author Smith's original Hebrew. As goofy fun as Smith's text is, fellow Israeli Tsarfati deserves the crown (maybe when Nina finally falls asleep and renounces hers). Tsarfati's attention to comical detail multiplies the adventurous humor, from the pet dog with his Elizabethan collar (what mischief did he commit?) and the wide-eyed doll that never expected a bath, to the revealing family photo gallery when Nina streaks down the hall. Bedtime's for oldsters; let the children play. Copyright 2014 Booklist Reviews.

Not only is Nina not asleep; she's ready to join the party, emerging from her bedroom in her tiara, frilly skirt, and not much else, in time to greet her parents' guests: "Give Aunt Ruth a kiss goodnight—/ then back to bed you go, all right?" Nina grabs an iced cupcake then, emboldened, clowns for the assembly and tries bathing her doll in the punch bowl ("Get down, young lady! That's not how we act./ You're going to bed this instant, and that's a fact"). No one hears. Instead, the guests join the fun, crawling around on their hands and knees; walk-ons by Nina's toddler brother and the family bulldog add more laughs. In contrast to the mayhem, there's something classic, even elegant about Tsarfati's spreads, which combine the poise of Greek urn paintings with the everyday chaos of life with kids. Though the translated verse can be clunky and some may object to Nina's self-indulgent anarchy, Smith and Tsarfati tap into a rich seam of sleepless parent humor. Clearly, as this Israeli duo proves, limelight-hogging children are an international phenomenon. Ages 5–7. (May) [Page ]. Copyright 2016 PWxyz LLC

After bedtime Little Nina refuses to go to sleep and gets into mischief while guests are visiting.

A rib-tickling anti-bedtime picture book offers a warm, real-world portrait of family life in all its chaos and follows the experiences of little Nina, who refuses to go to bed when the adults are awake and having fun at a party without her.

Little Nina will not go to bed. Not when the adults are having so much fun in the other room without her! Before her exasperated parents can catch up, Nina escapes her bedroom and races through the house, sampling cakes and just generally stirring up trouble. With Nina on the loose, a cordial family party becomes a wild good time, as her aunts and uncles join in the riotous fun. Finally it's time for the guests to leave, and it is bedtime at last'not just for Nina, but for the entire exhausted family.Illustrated with stylishly appealing three-color art, this is a loving, funny portrait of family life'and of what bedtime is often really like.