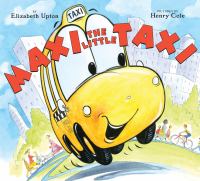 "On his first day of work, Maxi the little taxi zooms around town splashing in puddles and getting very dirty. Soon, no one wants to ride in him--until a little boy convinces Maxi to go to the car wash"--

Early in the morning, Maxi (a little yellow taxicab) is eager to start his first day on the job. A driverless taxi, he zips around town picking up passengers, whose ice cream drips on the seat, while muddy puddles splash his sides, and pigeons target him from above. By late afternoon, the little cab looks pretty dingy. His last riders, a boy and his mother, notice the grime and send Maxi though the car wash. Initially terrified, he soon loves the brushes, scrubbers, suds, and spray. Maxi ends his day clean and content. For young children, the six-page car-wash sequence will be the high point of this upbeat picture book. Written in rhymed couplets, the text propels the narrative at a steady pace, while Cole's paintings illustrate the story with wit and verve. From panoramic views of city streets to expressive depictions of individual people, the scenes are energized, animated, and often amusing. Displayed with its jaunty cover visible, this appealing picture book won't sit on library shelves for long. Copyright 2014 Booklist Reviews.

A taxi makes a literal splash on his first day on the job in this rhyming road trip, Upton's first picture book. After Maxi heads out from Mr. Buddy's garage, "He zoomed up./ He zoomed down./ He zoomed all around town—/ Splashing in every/ big puddle he found!" By the time Maxi has picked up some messy, snack-eating fares and had a close encounter with a pigeon, his grimy appearance starts hindering his business. "Soon all the people/ Who needed a taxi/ Took one quick look—/ And walked right past Maxi," writes Upton in one of the book's unlikeliest sequences (anthropomorphic taxis are one thing, but busy urbanites ignoring available cabs is another). Upton's rhymes are often cloyingly chirpy, and it isn't much of a plot (a visit to the car wash improves Maxi's day), but her liberal use of exclamatory phrases and onomatopoeic words should make for fun readalouds. Cole (Unspoken) helps give Maxi a zippy personality, turning his windshield into a large pair of eyes and his mouth into a grille, while bustling city backdrops further boost the story's kinetic energy. Ages 3–5. (Mar.) [Page ]. Copyright 2015 PWxyz LLC

PreS-K—It's the first day on the job for this shiny new taxi, and he's ready to roll. "Maxi ZIPPED here. He ZIPPED there. He ZIPPED everywhere—From the park, to the river. And back to the square. He ZOOMED up. He ZOOMED down. HE ZOOMED all around town. Splashing in every big puddle he found!" His passengers drip ice cream and mustard on his seats, and a pigeon leaves its mark as well—soon poor Maxi is filthy, both inside and out. Then a spotless girl taxi sidles up and says, "You'd better wash up, Mr. Gooey-Goo. Or no one will want to ride with you!" Sure enough, everyone ignores him, leaving him in tears until a boy and his mother hop in. At the young rider's insistence, they go to a car wash, which proves somewhat traumatic for the little guy. As he peers into the "mouth" of the big pink car wash, he's afraid he'll be eaten "like a yellow gumdrop!" Soon, the exhausted car heads back to his friend, Mr. Buddy, at the garage and tells him about his day. After a final polish, he closes his eyes and falls asleep. The anthropomorphized cab is quite adorable, with two black eyes peering out the front window and a big smile on his front end. Cole's bright palette and lively, appealing illustrations are the perfect complement to the rhyming text, which is filled with onomatopoeia and amusing details sure to delight young readers. VERDICT Pair this title with Debra and Sal Barracca's Adventures of Taxi Dog (Dial, 1990) for units on city life or transportation. A great bedtime story.—Barbara Auerbach, New York City Public Schools [Page 79]. (c) Copyright 2016 Library Journals LLC, a wholly owned subsidiary of Media Source, Inc. No redistribution permitted.

"On his first day of work, Maxi the little taxi zooms around town splashing in puddles and getting very dirty. Soon, no one wants to ride in him--until a little boy convinces Maxi to go to the car wash"--

On his first day of work, a taxicab zips and zooms around the town, splashing through mud puddles and collecting ice cream dropped by his customers until he becomes so dirty that nobody wants to ride with him.

Embarking on a first day of work, a little taxicab zips and zooms all around the town, splashing through mud puddles and collecting sticky bits of food dropped by his customers until he becomes so grimy that nobody wants to ride with him.

He's little! He's cute! But he's getting all dirty! This warm, charming story perfectly captures all the ups and downs of a busy little taxi's first day on the job!It's Maxi the Taxi's first day of work. What fun it is to zip and zoom all around the town!SPLASH go the mud puddles!PLIPPITY-PLOP drips the ice cream and mustard from sticky little fingers!Soon Maxi becomes so grimy and gooey that no one wants to ride with him.Who will help this dirty little taxi discover what he needs most? It's a smart little boy who takes Maxi for a noisy, tickly bath in the car wash!