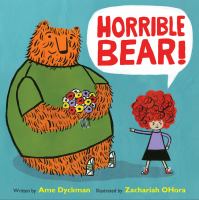 When Bear breaks a little girl's kite, she thinks he is a "HORRIBLE BEAR!"--until she makes a mistake of her own and learns the power of saying "I'm sorry."

*Starred Review* Hoping to retrieve her kite, a girl with frizzy red hair reaches into sleeping Bear's cave just as he rolls over, inadvertently crushing it beneath him. "Horrible Bear!" she shrieks and then stomps home to scribble, kick, and (accidentally) rip the ear off her stuffed bunny. Meanwhile, Bear is indignant over being so rudely awakened, and he is bent on revenge. He practices barging and making a ruckus, eventually stomping down the mountain to the girl's house, rawr-ing all the way. When the two meet, however, the girl (who now realizes accidents just happen) immediately apologizes, draining all the horrible out of Bear. He becomes Sweet Bear, dedicated to patching up toys and friendships. The creators of Wolfie the Bunny (2015) explore the common childhood experiences of accidents and misunderstandings with sensitivity and humor. Like many preschoolers, the little girl explodes in an instant when her kite gets broken, but she also calms herself quickly once she understands Bear's perspective. OHora makes good use of bright acrylics, boldly styled characters, and limited backgrounds to keep young listeners focused on the story. Those familiar with Wolfie will also appreciate the close resemblance of the toy bunny to Wolfie's sister, Dot. A perfectly over-the-top look at tantrums, friendship, and forgiveness that is sure to resonate with preschoolers and parents alike. Copyright 2014 Booklist Reviews.

With wit and tenderness, Dyckman and OHora, the duo behind 2015's Wolfie the Bunny, introduce two creatures who are absolutely furious with each other. A bear inadvertently crushes a kite that belongs to a girl with a mop of red hair. "Horrible bear!" she shouts, and stomps home. Angry at the girl's unfair condemnation ("She barged in!") Bear hatches a plan to get back at her: "It was a Horrible Bear idea." True to the way people process feelings at different speeds, Horrible Bear arrives at the girl's house just as she accidentally damages a toy and realizes that the bear's misdeed was an accident, too. "I'm sorry!" she tells him, "And all the horrible went right out of Bear." OHora works his goofy magic everywhere, observing the way anger causes ridiculous mishaps (the bear stomps through the girl's laundry and arrives festooned with clothespins) and affects innocent bystanders (a puzzled, picnicking goat). Dyckman and OHora portray genuine forgiveness without a hint of moralizing. Ages 3–6. Author's agent: Scott Treimel, Scott Treimel N.Y. Illustrator's agent: Sean McCarthy, Sean McCarthy Literary Agency. (Apr.) [Page ]. Copyright 2016 PWxyz LLC

PreS-Gr 2—In the mind of a child, mistakes are often misinterpreted as malfeasance, and the resultant anger can be contagious. Dyckman writes a simple story about just such a mistake. A little girl loses her kite in a bear's den, and when he rolls over in his sleep, he crushes it and becomes a HORRIBLE BEAR! Though the little girl seems to have some strategies to deal with anger (reading, painting, talking it out), it isn't until she mistakenly tears her own stuffed animal's ear that she gets some clarity about what really happened in that cave, and in her heart. Meanwhile, the bear is trying out his own righteous anger, charging to the little girl's house for a stand-off. A simple "I'm sorry" turns horrible into sweet. In reality, such spontaneous forgiveness and acceptance are rare, but cutting to the chase does readers no harm here. OHora's acrylic paint on paper illustrations are vivid and childlike. Thick black lines miraculously convey a range of emotions, and the girl's pile of bright red hair with black curlicues serves as a metaphor for both her anger and her exuberance. Molly Bang's Sophie finally has a worthy shelf-mate for absolutely spot-on characterizations of mood. VERDICT Highly recommended for picture book collections.—Lisa Lehmuller, Paul Cuffee Maritime Charter School, Providence, RI [Page 70]. (c) Copyright 2016 Library Journals LLC, a wholly owned subsidiary of Media Source, Inc. No redistribution permitted.

Feeling indignant when he accidentally breaks a little girl's kite and she yells at him in frustration, Bear gets a terrible idea about how to live up to his undeserved reputation until the little girl makes a mistake of her own, showing both of them the importance of apologizing. By the award-winning creators of Wolfie the Bunnie. Simultaneous eBook. 20,000 first printing.

When Bear breaks a little girl's kite, she thinks he is a "HORRIBLE BEAR!"--until she makes a mistake of her own and learns the power of saying "I'm sorry."

When he accidentally breaks a girl's kite and she gets upset with him, Bear gets an idea about how to live up to his undeserved reputation until the girl makes a mistake of her own, showing them both the importance of apologizing.

The New York Times-bestselling duo behind Wolfie the Bunny presents a hilarious read-aloud about accidents, outbursts, manners...and the power of saying "I'm sorry."Bear didn't mean to break a little girl's kite, but she's upset anyway--upset enough to shout "HORRIBLE BEAR!" Bear can't believe it. He's not horrible! But now he's upset, too--upset enough to come up with a truly Horrible Bear idea. In this charming but goofy picture book, readers will learn all about tempers, forgiveness, and friendship as Bear prepares to live up to his formerly undeserved reputation while the little girl realizes that maybe--just maybe--Bear isn't as horrible as she thought.