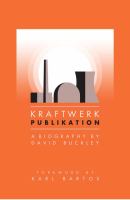 The German band Kraftwerk were pioneers of electronic music and the favorite punching bag of rock critics who found their music soulless and mechanical. Buckley makesa strong case for their significance and ongoing influence. They were enigmatic, almost never granting interviews and refusing to discuss their private lives. They were also the antithesis of rock: detached and cool, with absolutely no heat, and no love songs. Their music was conceived outside the Anglo-American rock, blues, folk, country, and jazz traditions; instead, they drew on a German mind-set that married art and technology. Yet they were huge fans of the Beach Boys and the Doors and admired the soundtracks of John Carpenter movies. Their "visual presentation," Buckley writes, was as important as their music. Kraftwerk's legacy can be heard in the music of such disparate artists as Brian Eno, David Bowie, Devo, Afrika Bambaataa, Franz Ferdinand, and Moby. Even the robotic dance style of Michael Jackson owes something to them. This is the closest thing to a biography Kraftwerk fans are likely to get; they will eat it up. Copyright 2014 Booklist Reviews.

The groundbreaking electronic music pioneers Kraftwerk produced some of the most original and influential music of the 1970s and 1980s. Their work, with its renunciation of Anglo-American popular song structure, orchestration, and tradition, merged music, technology, art, and performance and still influences rock, pop, dance, and hip-hop today. Journalist and author Buckley's (David Bowie: Strange Fascination) biography of the often media-shy German band deftly weaves its story with the contextualization of the band's influence on the pantheon of late 20th-century popular music. Using past interviews, published journalism (including some of his own pieces), and interviews he conducted with two key members as well as many other musicians inspired by them, Buckley's study takes Kraftwerk from its formative days in Germany through a run of classic albums released between 1977 and 1981 and on to recent retrospective shows at New York's Museum of Modern Art. VERDICT Buckley's book serves as more than just biography and musical analysis as it is also a cultural examination of electronic pop that will be of high interest to Kraftwerk and electronic music fans. Additionally, it will fuel discovery for those not familiar with the band's body of work and its significance.—James Collins, Morristown-Morris Twp. P.L., NJ [Page 86]. (c) Copyright 2015 Library Journals LLC, a wholly owned subsidiary of Media Source, Inc. No redistribution permitted.

"Contains exclusive interviews with former Kraftwerk members Wolfgang Flèur and Karl Bartos, as well as ex-group member Michael Rother, and artists such as Moby, Andy McCluskey [OMD], John Taylor [Duran Duran] and John Foxx. There is also revealing inputfrom academics and writers, designers, conceptual artists and music business insiders. Together it makes for the most complete picture of Krafwerk ever created" ---Book jacket.

As some of the earliest creators of electronic music, Kraftwerk became the living, performing embodiment of a stripped-down and unique brand of German rock. Records such as Trans-Europe Express, The Man Machine and Computer World were brilliant inventions that owed no debt to the prevailing music trends of their day. They've gone on to inspire the EDM movement that's launched the careers of countless DJs and the wildly popular (and also German) band Daft Punk. With contributions from Wolfgang Flür and Karl Bartos as well as other musicians from the world of electronica, this book offers a fascinating window into the long life of a truly inimitable group.

Kraftwerk: Publikation is the ultimate biography of the earliest Electronic Dance Music pioneers, available for the first time in the US.