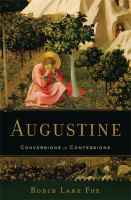 Robin Lane Fox re-creates Augustine's early life with unparalleled insight, showing how Augustine's quest for knowledge and faith finally brought him to Christianity and a life of celibacy. Augustine's Confessions, a vivid description of his journey toward conversion and baptism, still serves as a model of spirituality for Christians around the world.

*Starred Review* Perhaps only Newton's apple tree has attracted more attention than the fig tree that shaded Augustine when he heard a child's voice prompting him to read the scriptural passage summoning him to a new life as a Christian saint. By transporting readers to that tree, Fox places them in that pivotal moment when a philosophically sophisticated rhetorician decisively repudiates the worldly ambitions and carnal lusts that have long delayed his baptism into Christianity. The richly detailed narrative indeed guides readers beyond this decisive moment through 11 years of further transformations before Augustine records his life in his inimitable Confessions. Carefully unfolding the structure and themes of this masterpiece, Fox establishes its character as an extended prayer often misread as a protomodern autobiography. To clarify the origins of this singular prayer, Fox contrasts the life of its author with the lives of two prominent contemporaries—the gifted pagan orator Libanius and the devout Christian bishop Synesius—men whose life trajectories provide illuminating context for Augustine's account of his life's pilgrimage. Readers who—unlike Fox—share Augustine's faith may resist the psychologizing glosses for key spiritual experiences. But readers pious and skeptical alike will recognize Fox as an exceptionally insightful and probing biographer. Copyright 2014 Booklist Reviews.

Fox (emer., Oxford) is a top-tier classicist whose work on Alexander the Great has earned him scores of awards and widespread acclaim.  He is a meticulous scholar who has a knack for writing at a level that academic and general audiences alike can appreciate.  It is, therefore, no surprise that his biography on Saint Augustine has generated rave reviews from a host of critics.  But with several excellent biographies on Augustine already on the shelves—most notably, Peter Brown's new edition of Augustine of Hippo: A Biography (2000) and Henry Chadwick's more recent Augustine of Hippo: A Life (2009)—one may reasonably ask why readers would reach for Fox's instead of the others.  For one thing, Fox draws interesting parallels with other classical figures such as Libanius and Synesius, creating, as Fox puts it, "a triple set of sketches" with Augustine as the central panel.  Fox also shows appropriate reverence for Augustine's religious conversion and convictions—something that cannot be said about James J. O'Donnell's judgmental and somewhat bitter Augustine: A New Biography (2005).  Altogether, this is an engaging, respectful, and highly erudite yet readily accessible study worthy of its glowing commendations. Summing Up: Essential. Lower-division undergraduates through faculty; general readers. Copyright 2016 American Library Association.

Fox (classics, Oxford Univ.; The Classical World; Alexander the Great) adds another weighty tome to his long list of impressive works on ancient history. This volume follows the life of the North African saint Augustine (354–430), beginning, as the author's previous work Confessions does, with his childhood. His complicated youth follows, in which the young man takes a concubine, fathers a son, and accepts a heretical Manichaean gospel. Augustine is then transformed many times, undergoing several conversions. Fox presents the various contexts and many philosophies that influenced his subjects, including a substantial discussion of Manichaean and Platonic philosophy; all the while comparing Augustine to his contemporaries, especially the rhetorician Libanius. Highly intriguing is the exposition on the role of Platonic philosophy in Augustine's metamorphosis, his allegorical biblical exegesis, and his mystical ascent toward divine union. VERDICT Fox presents a complex, ever-changing, articulate, introspective, and idealistic philosopher sinner, revealing elements from Confessions and the author's many other titles. The volume would be best for readers to have some familiarity with the ancient Mediterranean or early church history. While this mountain of a book requires dedication and discipline, knowledge awaits those who reach the summit.—Jeffrey Meyer, Mt. Pleasant P.L., IA [Page 95]. (c) Copyright 2015 Library Journals LLC, a wholly owned subsidiary of Media Source, Inc. No redistribution permitted.

A portrait of the influential fourth-century saint details his early political and philosophical studies, his private indulgences in vice and the quest for knowledge and faith that prompted his Christian conversion and rise to a model of spirituality. By the author of Alexander the Great. 25,000 first printing. Illustrations.

"This narrative of the first half of Augustine's life conjures the intellectual and social milieu of the late Roman Empire with a Proustian relish for detail." -- New York Times In Augustine, celebrated historian Robin Lane Fox follows Augustine of Hippo on his journey to the writing of his Confessions. Unbaptized, Augustine indulged in a life of lust before finally confessing and converting. Lane Fox recounts Augustine's sexual sins, his time in an outlawed heretical sect, and his gradual return to spirituality. Magisterial and beautifully written, Augustine is the authoritative portrait of this colossal figure at his most thoughtful, vulnerable, and profound.

"This narrative of the first half of Augustine's life conjures the intellectual and social milieu of the late Roman Empire with a Proustian relish for detail." --New York TimesIn Augustine, celebrated historian Robin Lane Fox follows Augustine of Hippo on his journey to the writing of his Confessions. Unbaptized, Augustine indulged in a life of lust before finally confessing and converting. Lane Fox recounts Augustine's sexual sins, his time in an outlawed heretical sect, and his gradual return to spirituality. Magisterial and beautifully written, Augustine is the authoritative portrait of this colossal figure at his most thoughtful, vulnerable, and profound.