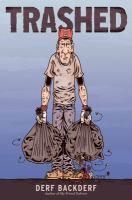 Graphic novel based on the author's time spent working on a garbage truck.

"We don't exist. Trash disappears . . . like magic," says the garbageman protagonist of this behind-the-scenes account of the most soul-deadening of all crap jobs. Informed by Backderf's brief stint working on a garbage truck in his twenties, the story follows J. B. and his crew as they dispose of everything from dead pets and diapers to engine blocks and the dreaded "foreclosure piles" outside repossessed homes while contending with complaining townspeople, malicious kids, bad weather, and petty small-town bureaucrats. Along the way, Backderf offers informative digressions on the history of garbage through the ages, the mechanics of garbage trucks, the problems with landfills, and what actually happens to recyclables. It's all far more entertaining than it sounds, thanks to the likability of J. B. and his at-loose-ends roommates; the colorful cast of oft-eccentric village service workers; and Backderf's slightly off-kilter, pleasantly ungainly drawings. Among the nuggets of info Backderf discloses is the fact that garbage collectors have the country's sixth-highest on-the-job fatality rate—something to ponder the next time you take your trash out. Copyright 2014 Booklist Reviews.

A dead cat. A headless deer. A dismembered car. A piano. A phone booth. People throw the darnedest things out, and together with the ever-present maggots and "diaper bombs," these artifacts wind up inside Betty, J.B.'s garbage truck. And from there, alas, into landfill. The setting and characters of J.B. and colleagues at the "Village Service Department" are fictional, but their misadventures were inspired by the cartoonist's actual post-high school job as a garbageman in the rural Midwest. A dead opossum and bags of dog droppings, for example, make excellent weapons against random adversaries. Such messy and hilarious antics are tempered with nonfiction interludes describing the history and scale of human garbage. Indeed, a family of four dumps nearly 1,500 bags a year. VERDICT Backderf's (My Friend Dahmer) detailed and grimy art is perfect for this raucous piece of infotainment about the crappiest of necessary crap jobs. His intentionally tasteless yet informative approach may not persuade readers to use less "stuff," but it might encourage them to bag their trash more neatly. For high schoolers and adults hospitable to tales about the underside of life.—M.C. [Page 60]. (c) Copyright 2015 Library Journals LLC, a wholly owned subsidiary of Media Source, Inc. No redistribution permitted.

After the gut-wrenching psychological investigation/memoir My Friend Dahmer, indie comic stalwart Backderf returns to the scabrous humor and pointed commentary of his earlier work with a loose scattering of stories about the garbage men in a small, decaying Ohio town. A onetime garbage man himself, Backderf has a clear affinity for these hardworking stiffs and their travails. If they're not getting hassled by their uptight boss, they're dealing with the daily challenges of the sanitation business: liquefied garbage frozen solid in their cans, swarms of maggots, corpse-waking smells, biblical weather, the puzzle of how to get an upright piano weighing several hundred pounds into a garbage truck. The blocky grotesquerie of Backderf's art is well-suited to the material, and the episodic, slackerish narrative is spiked here and there by brief lessons on the history of the garbage truck, the ecology of the landfill, and an answer to the question of whether rich or poor neighborhoods generate the most trash (hint: it's not the poor). A downbeat but entertaining ode to the odiferous realities of getting by. (Nov.) [Page ]. Copyright 2015 PWxyz LLC

Every week we pile our garbage on the curb and it disappears'like magic! The reality is anything but, of course. Trashed, Derf Backderf's follow-up to the critically acclaimed, award-winning international bestseller My Friend Dahmer, is an ode to the crap job of all crap jobs'garbage collector. Anyone who has ever been trapped in a soul-sucking gig will relate to this tale. Trashed follows the raucous escapades of three 20-something friends as they clean the streets of pile after pile of stinking garbage, while battling annoying small-town bureaucrats, bizarre townfolk, sweltering summer heat, and frigid winter storms. Trashed is fiction, but is inspired by Derf's own experiences as a garbage­man. Interspersed are nonfiction pages that detail what our garbage is and where it goes. The answers will stun you. Hop on the garbage truck named Betty and ride along with Derf on a journey into the vast, secret world of garbage. Trashed is a hilarious, stomach-churning tale that will leave you laughing and wincing in disbelief. Soon to be a major motion picture from director Bradley Jay Kaplan (Stealing Cars).