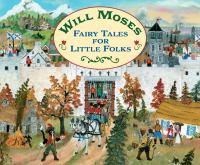 Folk artist Moses recounts five familiar fairy tales—Little Red Riding Hood, Rumpelstiltskin, Snow White, Puss in Boots, and Beauty and the Beast—accompanied by his distinctively feathery, pastoral painting style. Moses's retellings are faithful and straightforward, and he strikes an old-fashioned tone in keeping with the look of the tiny images that pepper the pages. Each story concludes with an evocative full-spread painting that charts the key events of the story; in a painting for Beauty and the Beast, readers see Beauty's merchant father setting out on horseback at left, his first encounter with a fearsome horned beast along a winding trail in the center of the spread, and the Beast's courtship of Beauty unfolding on the right. It's a cozy, traditional collection, well-suited for brief, bedtime readalouds. Ages 3–7. (Sept.) [Page ]. Copyright 2015 PWxyz LLC

K-Gr 2—Moses retells five fairy tales with his own style of casual narration and folk art illustrations. The basics of the stories will be familiar to children who have read "Little Red Riding Hood," "Rumpelstiltskin," "Snow White," "Puss in Boots," and "Beauty and the Beast," but Moses adds a bit of originality in the dialogue and in the characters' backgrounds. In Moses's version of the first story, readers learn it was Grandmother who made the red velvet riding coat and that the reason the tricky old wolf went to Grandmother's house was to eat the grandmother, the girl, and the pie and tea that Little Red Riding Hood was carrying in her basket. There are no happy endings for the villains in Moses's retellings. In "Puss in Boots," the ogre who transforms into a mouse is gobbled up by Puss, and in "Little Red Riding Hood," the woodcutter uses scissors to cut open the belly of the wolf. Several spot illustrations appear on the side of each page of the story, which are six to eight pages in length and adorn the end of the stories as double-page overviews of each plot and setting. Moses ends the book with a brilliant summary of why he believes it's important to read fairy tales to children. VERDICT This book conjures up excitement in readers by highlighting aspects of the original fairy tales and by introducing bits of new material in both the text and the illustrations.—Tanya Boudreau, Cold Lake Public Library, AB, Canada [Page 81]. (c) Copyright 2015 Library Journals LLC, a wholly owned subsidiary of Media Source, Inc. No redistribution permitted.

Five best-loved fairy tales by a renowned folk artistAny parent or grandparent longing to share these timeless, well-loved tales with a favorite child will welcome this enchanting collection from acclaimed folk artist Will Moses.Five tales are included: Little Red Riding Hood, Snow White, Beauty and the Beast, Rumpelstiltskin, and Puss in Boots. Each one is profusely illustrated with vignettes as well as a lavish double spread that incorporates all the key events of the story.This handsome volume, full of fascinating detail and plentiful charm, is destined to become a family treasure.