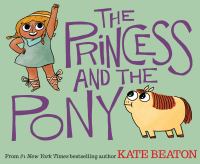 The princess and the pony

Princess Pinecone would like a real war horse for her birthday, instead of which she gets a plump, cute pony--but sometimes cuteness can be a kind of weapon, especially in a fight with dodgeballs and spitballs and hairballs and squareballs.

*Starred Review* Princess Pinecone may be the smallest warrior, but that doesn't stop her from wanting to be a champion! Her birthday is approaching, and this year she wants a horse perfect for riding into the upcoming battle. What she gets instead of a stately steed, however, is a short, fat, cross-eyed pony that farts too much. Pinecone tries to train the daffy little thing in time for the great battle, but it doesn't go well—check out the fat pony cheerily on his back while a majestic knight fist-bumps his stallion in the background. But Pinecone perseveres, and despite her pony's shortcomings, they join in the great battle anyway. When they leap (or, rather, toddle) into the fray, Pinecone gets ready to be a fearsome fighter only to discover that her dopey ride melts even the fiercest warriors' hearts. Beaton's offbeat, colorful cartoon style makes great use of expressive brows, exaggerated figures, and huge eyeballs for maximum cuteness, and she stuffs each spread with hilarious details. Little ones will surely empathize with Pinecone's aspirations to be big and powerful, but it's Beaton's expert comedic timing that will rein them in for the long haul. The perfect combination of heartwarming and hilarious. Copyright 2014 Booklist Reviews.

Beaton, whose "Hark, a Vagrant!" webcomic has won her a devoted audience, makes her picture-book debut with a story starring Pinecone, a Viking princess, and the dumpy, walleyed pony sometimes seen in her comics. The pony functions as a (very) blank canvas onto which other characters project their expectations; here, it's what Pinecone's parents give her when she asks for a "real warrior's horse" for her birthday. She's appalled, "but you can't say no to a birthday present, so she took the little pony to her room, where it ate things it shouldn't have, and farted too much." When it's time for the great battle, Princess Pinecone fears the pony will humiliate her. Instead, it melts the heart of Otto the Awful, the meanest warrior of all. "Awww, what a cute little pony!" he murmurs. Beaton champions a bouquet of affirming themes: strong girls, acceptance of difference, and battling with nothing more violent than dodgeballs, spitballs, and other related objects. It's a smart, brisk story that tosses aside conventional ideas of what princesses (and ponies) are "supposed" to be. Ages 4–8. Agent: Seth Fishman, Gernert Company. (June) [Page ]. Copyright 2014 PWxyz LLC

K-Gr 2—Rambunctious Princess Pinecone is the smallest warrior in her kingdom, but what she lacks in size, she makes up for in enthusiasm. Tired of receiving novelty sweaters for her birthday, Pinecone asks her parents for a big, strong battle horse—and receives a chubby little pony with a vacant expression, and incurable flatulence, instead. Though he doesn't fit the standard requirements of the typical trusty steed—"It's too small! It's too round! And I think its eyes are looking in different directions…(This was true, but only sometimes.)"—the little pony proves to be a surprising asset on the day of her great battle. Chunky, colorful digital illustrations provide plenty of detail to keep readers entertained; older children will enjoy exploring all of the different posters marking Pinecone's walls, or some of the sillier warriors in the battle fray, including one sneakily eating a hot dog. The text contains a healthy dose of alliteration and buzzwords that will boost vocabulary ("Pinecone was flabbergasted, flummoxed, floored!") while making for a fun read-aloud. VERDICT A highly recommended, charmingly illustrated tale of teamwork and tenderness.—Ashleigh Williams, School Library Journal [Page 124]. (c) Copyright 2014. Library Journals LLC, a wholly owned subsidiary of Media Source, Inc. No redistribution permitted.

Princess Pinecone would like a real war horse for her birthday, instead she gets a plump, cute pony--but sometimes cuteness can be a kind of weapon, especially in a fight with dodgeballs, spitballs, hairballs and squareballs.

Princess Pinecone would like a real war horse for her birthday, instead of which she gets a plump, cute pony--but sometimes cuteness can be a kind of weapon, especially in a fight with dodgeballs and spitballs and hairballs and squareballs.

Wanting a big, strong, beautiful horse that will help her fulfill her dream of becoming a warrior, Princess Pinecone is dismayed when her birthday arrives and she does not quite get the horse she envisioned. By the Harvey Award-winning author of Hark! A Vagrant.

Introducing Kate Beaton, a major new picture book talent, and author/illustrator of #1 New York Times bestseller Hark! A Vagrant!Princess Pinecone knows exactly what she wants for her birthday this year. A BIG horse. A STRONG horse. A horse fit for a WARRIOR PRINCESS! But when the day arrives, she doesn't quite get the horse of her dreams...From the artist behind the comic phenomenon Hark! A Vagrant, The Princess and the Pony a laugh-out-loud story of brave warriors, big surprises, and falling in love with one unforgettable little pony.