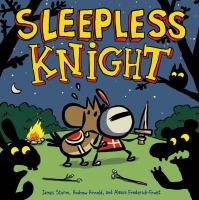 The Knight and his trusty horse Edward go on a camping trip, but the Knight cannot sleep when he discovers he has left his beloved teddy bear behind.

The Knight is ready for her camping trip! She has loaded up her trusty horse, Edward, with her teddy bear and several dozen other overnight essentials, and after a long day of journeying, they reach her castle's backyard. They eat their marshmallows and set up their tent . . . but where's Teddy? The Knight can't sleep without him, and soon her caterwauling catches the attention of a nearby rabbit who offers to help find the bear. It turns out he has seen someone just like him: round, brown, and furry with a black nose at the end of his snout, and he is sleeping nearby in a cave (!). Laid out with large, colorful, easy-to-follow panels; doodlelike figures engaged in all kinds of appealing slapstick situations; and big, bold speech bubbles, this is a solid introduction to graphic novels for a young audience. The endpapers also include step-by-step instructions for drawing the Knight, Edward, and several other characters, an inclusion that is sure to please budding artists. Copyright 2014 Booklist Reviews.

The creators of the Adventures in Cartooning books look to a younger audience with this first title in a picture-book series. Their romp stars the exuberantly self-centered knight and her long-suffering horse, Edward, and it's bursting with exclamation points, silly jokes, and slapstick humor. The knight is planning a camping trip, as knights do, and she loads up her trusty steed with the essentials: her rock collection, her scooter, and her teddy bear, packing everything into a massive gray sack on Edward's back. Despite his heavy load, she's the one who collapses with fatigue within sight of the castle walls. "That's it for today, Edward, I can't go any farther. Let's make camp here!" she exclaims, taking out the marshmallows. "I only brought 30 bags. I hope that's enough." After she discovers that her teddy is missing, sleep is out of the question for everyone until he's found. The story bubbles with an inexhaustible energy, never snarky or overreaching, while the endpapers and their directions for drawing the story's characters invite readers to create episodes of their own. Ages 3–5. (Apr.) [Page ]. Copyright 2014 PWxyz LLC

Gr 1–3—"This will be the BEST camping trip EVER!" declares the Knight, setting off for a night of adventure along with trusty horse Edward. After pitching the tent and feasting on marshmallows, the Knight crawls into a cozy sleeping bag only to discover that his teddy bear is missing. Deep in a marshmallow-induced coma, Edward cannot help search for the favorite stuffed animal. The Knight accidentally awakens a grumpy rabbit, who points to the location of a teddy bear—only this bear turns out to be real. Running back to camp, the Knight eventually finds the right Teddy and falls asleep, leaving the horse, rabbit, and bear wide awake. This simple graphic novel with three to four frames per page is colorful and hilarious. The Knight, an androgynous character wearing a face-covering helmet, has emotions superbly expressed through body language and text formatting. The endpapers add to the fun by providing instructions for drawing all four characters in a variety of poses. VERDICT This funny tale is sure to be popular with young readers and cartoonists.—Gaye Hinchliff, King County Library System, WA [Page 130]. (c) Copyright 2014. Library Journals LLC, a wholly owned subsidiary of Media Source, Inc. No redistribution permitted.

The Knight and his trusty horse Edward go on a camping trip, but the Knight cannot sleep when he discovers he has left his beloved teddy bear behind.

The favorite characters from Adventures in Cartooning return in a lively comics picture book that traces the Knight's first camping trip, which is marked by Teddy's disappearance and an encounter with a real bear.

Knight is so excited for the big camping trip, but sleeping under the stars is only fun when you have your trusty teddy bear--and Knight's is nowhere to be found.

The Knight can't wait for her first camping trip! She and her horse Edward pack everything they need--including her beloved Teddy--and head out into the woods. But when it's time for bed, Teddy is nowhere to be found! A helpful rabbit thinks this "Teddy" sounds familiar, and sends the Knight off to a cave... but that's no teddy bear in that cave. That's a real bear! In this sweet, simple adventure, basic comics elements combine with the picture book format to create a picture book for the youngest of comics readers, and a fantastic introduction into the world of Adventures in Cartooning.