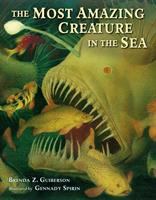 The most amazing creature in the sea

Similar in concept to Guiberson and Spirin's The Greatest Dinosaur Ever (2013), this handsome book presents a variety of fascinating ocean animals, from the anglerfish to the vampire squid. Speaking in first person, each one tells why it is "the most amazing creature in the sea!" Twelve species vie for that title, along with one aggregate group called helpers (oysters, sea urchins, coral, krill, etc.) that play crucial, though perhaps less dramatic, roles in ocean ecology. Each double-page spread introduces a different contender boasting of its remarkable feats and features in a few lines of text, including passages such as, "I can tie myself into a knot to squeeze slime off my body. I burrow into dead creatures for a meal and leave the bones for the zombie worms." With short paragraphs that read aloud very effectively and richly colored, intricately detailed paintings that look their best from a little distance, this picture book is well designed for sharing with groups of children. A natural for classroom science units. Copyright 2014 Booklist Reviews.

In their fourth collaboration, Guiberson and Spirin echo the format of 2013's The Greatest Dinosaur Ever as a dozen aquatic creatures take turns claiming to be the "most amazing creature in the sea!" Each animal describes itself vividly and evocatively: "Predators don't stand a chance against my powers of evasion," boasts a vampire squid. Spirin's always lush illustrations go beyond naturalistic detail to give the subjects a dignity and majesty: a trio of 5,000-pound ocean sunfish, the "heaviest bony fish in the world," have the glow of Renaissance putti, while a mimic octopus's copper-and-cream tentacles unfurl languidly across an inky blue seascape. Readers will enjoy debating who deserves the coveted title—perhaps the utterly alien hagfish or the blue whale, which "takes in 17,000 gallons of food-filled water in a single mouthful"? An awe-inspiring look at ocean biodiversity that revels in the significance of every animal. Ages 4–8. (June) [Page ]. Copyright 2014 PWxyz LLC

Gr 2–5—Handsome, softly realistic illustrations depict an assortment of ocean dwellers, each accompanied by a brief paragraph full of interesting factoids as each creature proclaims itself "the most amazing creature in the sea." A wide variety of oceanic life unfolds in the images, which brim with details, from the blue blood of the vampire squid to the natural antifreeze of the wolffish and the gelatinous slime of the hagfish. Other creatures depicted in these hauntingly vivid visuals include a toothy anglerfish, a massive leatherback turtle, and a leafy sea dragon. The final spread is devoted to the lesser fry that keep the oceans—and other fish—clean: the filterers, the alga-eaters, the reef-building corals, and the wrasse. An author's note on the importance of preserving these species is accompanied by a brief bibliography. Pair this with Erich Hoyt's more difficult Weird Sea Creatures (Firefly, 2013) and Sylvia Earle's Sea Critters (National Geographic, 2000). VERDICT An eye-catching jumping-off point for further investigation.—Patricia Manning, formerly at Eastchester Public Library, NY [Page 178]. (c) Copyright 2014. Library Journals LLC, a wholly owned subsidiary of Media Source, Inc. No redistribution permitted.

A lavishly illustrated introduction to the ocean's most superlative animals invites young readers to choose their favorites among sea creatures with the most venom, the greatest diving ability, the best rotating eyes and more. By an artist who has been awarded five gold medals from the Society of Illustrators and first prizes in both the Bologna and Barcelona International Book Fairs.

Fascinating facts and spectacular illustrations will inspire young readers to choose their own favorite sea creatures.