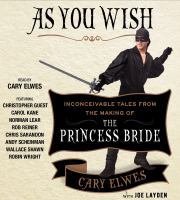 From actor Cary Elwes, who played the iconic role of Westley in The Princess Bride, comes a first-person account and behind-the-scenes look at the making of the cult classic film filled with never-before-told stories, exclusive photographs, and interviews with costars Robin Wright, Wallace Shawn, Billy Crystal, Christopher Guest, and Mandy Patinkin, as well as author and screenwriter William Goldman, producer Norman Lear, and director Rob Reiner.

*Starred Review* In this entertaining paean to the cult-movie classic The Princess Bride, Elwes enthusiastically shares his memories of making the film and effusively gives credit to director Rob Reiner and the cast and crew. Warmhearted and frequently hilarious anecdotes abound, from tales of Billy Crystal's ad libs to the amusing yet poignant stories about André the Giant. There's also extensive coverage of the famous sword fight between Elwes and Mandy Patinkin. The pair spent grueling hours every day practicing to create what Reiner envisioned as the greatest movie sword fight ever. Audio transforms this book from an enjoyable read into a great listening experience. As Elwes relates all the behind-the-scenes incidents, along with the humor and the drama that went into making the movie, listeners hear the passion and enthusiasm in his voice. Cast members and crew add their own memories to the narrative, and it's a treat to hear Reiner, Patinkin, Crystal, Robin Wright, Christopher Guest, and Wallace Shawn reminisce. Occasionally, these cameos are repetitive, as multiple cast members add very brief comments that make the same point, but that's a small quibble. This memoir is clearly aimed at the film's myriad fans, but even listeners who aren't fans when they start the audiobook are likely to become so by the end, and this outstanding production is sure to send patrons back to the film itself. Copyright 2019 Booklist Reviews.

Here Elwes brings together cast and crew members from the iconic movie The Princess Bride for a stroll down memory lane. Released in 1987 to limited box office success, the movie subsequently became a favorite among viewers of all ages. Elwes, as the movie's leading man, is the ideal person to shepherd readers through the film's history—from the screenplay adaptation by novelist William Goldman to the 25th-anniversary cast reunion. In addition to relating humorous stories about the making of the film and a satisfying focus on the famous duel scene, Elwes and the rest of the cast give readers a front-row seat to how movies get made. The audio version is the ideal way to consume this work, narrated as it is by original cast and crew members Elwes, Carol Kane, Norman Lear, Rob Reiner, Chris Sarandon, Andy Scheinman, Wallace Shawn, and Robin Wright. Elwes is the star here as he was in the film, giving free rein to his penchant for impressions as he imitates Reiner, Andre the Giant, and even Bill Clinton. VERDICT This is essential listening for fans of the movie and will appeal to a wider audience as well. For further reading, check out Box Brown's graphic novel Andre the Giant: Life and Legend.—Anna Mickelsen, Springfield City Lib., MA [Page 51]. (c) Copyright 2014. Library Journals LLC, a wholly owned subsidiary of Media Source, Inc. No redistribution permitted.

Elwes shares his experience as one of the lead actors in The Princess Bride—from his initial meetings with director Rob Reiner to the 25th-anniversary screening of the film. He includes trivia about the production, and the various challenges he faced personally and professionally throughout. Elwes peppers the memoir with interviews of various people involved with the production of The Princess Bride, including Reiner, Robin Wright, Christopher Guest, and Wallace Shawn. Some of them, such as Reiner and Wright, even narrate their contributions in the audio edition, effectively conveying their excitement about the film. The absence of the voices of some of those interviewed leads to an imbalance, however, with Elwes narrating their sections. Even so, his voice is light and energetic, and it's clear that he is smiling throughout the production. An S&S/Touchstone hardcover. (Nov.) [Page ]. Copyright 2014 PWxyz LLC

In a twenty-fifth anniversary, behind-the-scenes account of the making of the cult classic film, the lead actor shares never-before-told stories and exclusive photographs as well as interviews with fellow actors and producers of the film.

From actor Cary Elwes, who played the iconic role of Westley in The Princess Bride, comes the New York Times bestselling account of the making of the cult classic film filled with never-before-told stories, exclusive photographs, and interviews with costars Robin Wright, Wallace Shawn, Billy Crystal, Christopher Guest, and Mandy Patinkin, as well as author and screenwriter William Goldman, producer Norman Lear, and director Rob Reiner.The Princess Bride has been a family favorite for close to three decades. Ranked by the American Film Institute as one of the top 100 Greatest Love Stories and by the Writers Guild of America as one of the top 100 screenplays of all time, The Princess Bride will continue to resonate with audiences for years to come. Cary Elwes was inspired to share his memories and give fans an unprecedented look into the creation of the film while participating in the twenty-fifth anniversary cast reunion. In As You Wish he has created an enchanting experience; in addition to never-before seen photos and interviews with his fellow cast mates, there are plenty of set secrets and backstage stories. With a foreword by Rob Reiner and a limited edition original poster by acclaimed artist Shepard Fairey, As You Wish is a must-have for all fans of this beloved film.