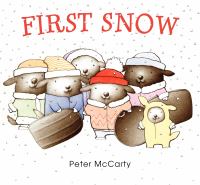 When Pedro comes from far away to visit his cousins, who are eager to introduce him to snow, all Pedro can think about at first is how much he dislikes cold.

From the same neighborhood where the bunny star of Chloe (2012) watched television with her big family comes another comfortable story about the simple joys of an earlier time. Pedro arrives in the big city, all by himself, just in time for the first snowfall—and his own first experience with snow. His five canine cousins assure him that snow is just wonderful, but Pedro, no fan of the cold, isn't buying it. They bundle up and venture out to engage in the best elements of snow—angels and sledding and snowflakes on the tongue—and, with the help of the neighborhood "kids" (including Chloe herself, in a cameo appearance), Pedro is a convert. The rich, buffed landscape is a perfect backdrop for McCarty's fluffy, graphite character work. The sense of furry softness, which kids will want to reach out and touch, contrasts nicely with the bright, flat pastels of hats and snowsuits. The open spreads, empty of any detail, reflect the serene stillness of falling snow, drawing the reader right into the magical moment. A winter winner. Copyright 2014 Booklist Reviews.

Pedro makes a winter visit to his cousins, Sancho, Bella, Lola, Ava, and Maria. He's never seen snow before. "I don't think I will like it," Pedro says. Neighbors come to play; when one girl, Abby, tells Pedro about snowflakes ("You can even catch them on your tongue. It tastes good!"), Pedro is unimpressed. "It tastes cold," he says. McCarty's characteristic, ever-so-delicate shading gives the faces of his roly-poly creatures substance and softness. He paints their snowsuits and hats as flat shapes in candy-store colors, making the characters look like deliciously dressed-up paper dolls. Pedro's cousins and their friends leap and cavort like a Broadway ensemble, and their energy gives the story its visual excitement—and a bubbly contrast to Pedro's pessimism. When sledding is suggested, Pedro asks, "Why do you go up?" "To go back down," says Henry, who fans will recognize from Henry in Love. Fortunately, Pedro's first sled ride makes him a believer. McCarty deftly spins the story toward its inevitable conclusion, and his sly, Dick-and-Jane prose ("It is cold," Pedro keeps saying) makes this a rewarding readaloud. Ages 4–8. Agency: Gotham Group. (Dec.) [Page ]. Copyright 2014 PWxyz LLC

PreS-Gr 1—Pedro, a young anthropomorphic dog, has traveled from far away, and his cousins Sancho, Bella, Lola, Ava, and Maria are eager to introduce him to snow—something he's never before experienced. Though Pedro is initially reluctant, the cousins, joined by a host of other animals—bunnies, owls, chickens, and more—show him how to make snow angels, taste snowflakes, and sled down a hill, until he finally warms to the day's activities. Employing ink and watercolors rendered in a muted, beige-heavy palette, McCarty relies upon the sweetly old-fashioned style readers will fondly remember from titles such as Henry in Love (2009) and Chloe (2012, both HarperCollins)—Chloe the rabbit even makes an appearance. The animals are an enchanting bunch, striking such dynamic poses as they cavort that Pedro and readers alike will be hard-pressed to resist. McCarty sustains a gentle but upbeat tone through charming, dialogue-heavy text ("'Put on your boots! Put on your coat! Put on your hat and mittens!'"), as the cousins eventually win Pedro over, encouraging him cheerfully but never forcefully. Through it all, a message emphasizing the importance of trying new things is unobtrusively folded in, but most of all, readers will come away with a genuine sense of fun and the joy of family and friends. A delightful winter excursion.—Mahnaz Dar, School Library Journal [Page 88]. (c) Copyright 2014. Library Journals LLC, a wholly owned subsidiary of Media Source, Inc. No redistribution permitted.

When Pedro comes from far away to visit his cousins, who are eager to introduce him to snow, all Pedro can think about at first is how much he dislikes cold.

A companion story to Chloe and the award-winning Henry in Love follows a day of firsts for young Pedro, who—along with his animal friends—experiences a first snowfall, making a snow angel, a sled run and more. By the Caldecott Honor-winning author of Hondo & Fabian. 40,000 first printing.