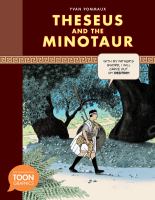 Theseus and the Minotaur

Story of the Greek hero Theseus, who ventures into the labyrinth to battle the fierce Minotaur.

In this newest interpretation of the Theseus and Minotaur myth, French illustrator and author Pommaux highlights important moments, from his divine birth to his eventual creation of the first democracy. Pommaux's illustrations focus on light coloring and shading, making the sometimes brutal tale gentle enough for younger audiences. Large splash panels really draw the eye and give a great sense of the story, which should help students who may struggle with reading lengthy blocks of text. Although those looking for a more action-packed, comic book–style adaptation may be a touch disappointed, teachers looking for a great resource on this myth will be pleased. Added at the end is an in-depth glossary that further explains characters and topics only briefly mentioned in the text, making it an ideal resource for those learning about this myth for the first time. Additional material such as discussion questions, trading cards of major characters, and a maze might make this useful for a lesson plan on Greek mythology all on its own. A good fit for visual learners. Copyright 2014 Booklist Reviews.

French author-artist Pommaux offers a solid graphic retelling of the life of Theseus, first published in France. Perhaps referencing the oral traditions through which the myths were first disseminated, the story is bookended by nighttime scenes on a boat in the Aegean Sea, where an elderly man recounts Theseus's story to a boy and girl. From there, Pommaux offers clean pencil-and-ink images that range from small horizontal panels to larger scenes, colored in pale tan, green, pink, and blue. Like many myths, Theseus's legend has a few details that require some sensitivity when recasting the story for younger audiences. "Unable to resist passions," Theseus's mother-to-be, Aethra, is "swept... up in a watery embrace" by the god while bathing. Later, Pommaux draws Pasiphaë climbing into a hollow cow "to get closer to the white bull" that Poseidon has made her fall in love with; soon after, she gives birth to the Minotaur. (Pommaux also lets readers' imaginations do the work with regard to gory details of Theseus's heroic deeds and the Minotaur's bloodthirstiness.) Character bios, pronunciations, and an index round out a handsomely illustrated introduction to a classical hero. Ages 7–10. (Aug.)¦ [Page ]. Copyright 2014 PWxyz LLC

Gr 4–8—This graphic novel version Greek myth of Theseus, founder of democracy, and the Minotaur, a half-human, half-bull creature, is a widely appealing tale in which a heroic warrior reclaims his destiny. Theseus, son of Aethra and King Aegeus, journeys to Athens to find his long lost father. On his way, he faces many foes, including a rampant bull. Upon arriving in Athens, the hero learns that the Minotaur has been locked away in a labyrinth, threatening to kill anyone who enters his domain, including many prisoners from Athens. Theseus destroys the Minotaur, but miscommunication leads his father to think he was unsuccessful. Tragically, Aegeus throws himself into the sea. Theseus becomes king, but eventually abdicates the thrown, giving power to the people. In keeping with the oral tradition of mythology, this work opens with a man facing two children—and readers—explaining that he is going to share an ancient tale. French comic artist and children's author Pommaux has recreated this epic myth in illustrated fiction format, with important dialogue written in text bubbles. Unlike standard graphic novels, there are no panels. It is possible to understand the story from the art and sparse text bubbles alone, but the majority of the tale is told in straight text surrounding the art. The full-color art complements and enhances the narrative. Back matter includes an illustrated list of characters, index, and glossary. Notes on pronunciation can be found on most pages. An accessible, informative, and enjoyable read.—Marissa Lieberman, East Orange Public Library, NJ [Page 93]. (c) Copyright 2014. Library Journals LLC, a wholly owned subsidiary of Media Source, Inc. No redistribution permitted.

Presents the story of Theseus and his battle against the Minotaur as a graphic novel.

Relive Theseus's fantastic adventure as he comes face-to-face with the terrible Minotaur!

Son of both a god and a man, Theseus was destined for greatness. How did he become both the king of Athens and the creator of democracy? A must for fans of Percy Jackson and mythology-inspired video games--it will captivate young readers and nourish their imaginations.