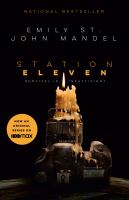 "An audacious, darkly glittering novel about art, fame, and ambition set in the eerie days of civilization's collapse, from the author of three highly acclaimed previous novels. One snowy night a famous Hollywood actor slumps over and dies onstage during a production of King Lear. Hours later, the world as we know it begins to dissolve. Moving back and forth in time-from the actor's early days as a film star to fifteen years in the future, when a theater troupe known as the Trave...ling Symphony roams the wasteland of what remains-this suspenseful, elegiac, spellbinding novel charts the strange twists of fate that connect five people: the actor, the man who tried to save him, the actor's first wife, his oldest friend, and a young actress with the Traveling Symphony, caught in the crosshairs of a dangerous self-proclaimed prophet. Sometimes terrifying, sometimes tender, Station Eleven tells a story about the relationships that sustain us, the ephemeral nature of fame, and the beauty of the world as we know it"--

*Starred Review* Mandel's (The Lola Quartet, 2012) ambitious, magnificent fourth novel examines the collapse of civilization after a deadly flu wipes out most of the world's population. Moving gracefully from the first days of the plague to years before it and decades after, Mandel anchors the story to Arthur Leander, a famous actor who dies of a heart attack while playing King Lear on stage. We see glimpses of Arthur's life years before his passing: his doomed relationship with his first wife, the exploitation of an old friendship, his failings as a father. And then we follow characters whose lives Arthur touched in some way: the paramedic who tried to save him, his second ex-wife and their damaged son, the child actress who joins a traveling theater troupe-cum-orchestra. In this postpandemic time, people live in gas stations and motels, curate museums filled with cell phones and car engines, and treasure tabloids and comic books. One comic book gives the novel its title and encapsulates the longing felt by the survivors for the world they have lost.Mandel's vision is not only achingly beautiful but also startlingly plausible, exposing the fragile beauty of the world we inhabit. In the burgeoning postapocalyptic literary genre, Mandel's transcendent, haunting novel deserves a place alongside The Road (2006), The Passage (2010), and The Dog Stars (2012). Copyright 2014 Booklist Reviews.

Onstage at a Toronto theater, an aging movie star drops dead while performing the title role in King Lear. As the other cast members share a drink at the lobby bar before heading into the snowy night, none can know what horrors await them: "Of all of them at the bar that night, the bartender was the one who survived the longest. He died three weeks later on the road out of the city." The Shakespearean tragedy unfolds into a real-life calamity just before the entire world is overtaken by a catastrophic flu pandemic that will kill off the vast majority of the population. The narrative is organized around several figures present at the theater that night, and the tale travels back and forth in time, from the years before the pandemic through the following 20 years in a world without government, electricity, telecommunications, modern medicine, or transportation. In this lawless and dangerous new reality, a band of actors and musicians performs Shakespeare for the small communities that have come into existence in the otherwise abandoned landscape. In this unforgettable, haunting, and almost hallucinatory portrait of life at the edge, those who remain struggle to retain their basic humanity and make connections with the vanished world through art, memory, and remnants of popular culture. VERDICT This is a brilliantly constructed, highly literary, postapocalyptic page-turner, and should be a breakout novel for Mandel. [See Prepub Alert, 3/24/14.]—Lauren Gilbert, Sachem P.L., Holbrook, NY [Page 100]. (c) Copyright 2014. Library Journals LLC, a wholly owned subsidiary of Media Source, Inc. No redistribution permitted.

A movie star who's decided to pound the boards as King Lear collapses and dies mid-performance, and shortly thereafter civilization collapses and starts dying as well. The narrative then moves between the actor's early career and a journey through the blasted landscape 15 years after the book's opening events. Indie Next darling Mandel breaks out with a major publisher. [Page 57]. (c) Copyright 2014. Library Journals LLC, a wholly owned subsidiary of Media Source, Inc. No redistribution permitted.

Few themes are as played-out as that of post-apocalypse, but St. John Mandel (The Lola Quartet) finds a unique point of departure from which to examine civilization's wreckage, beginning with a performance of King Lear cut short by the onstage death of its lead, Arthur Leander, from an apparent heart attack. On hand are an aspiring paramedic, Jeevan Chaudary, and a young actress, Kirsten Raymonde; Leander's is only the first death they will witness, as a pandemic, the so-called Georgia Flu, quickly wipes out all but a few pockets of civilization. Twenty years later, Kirsten, now a member of a musical theater troupe, travels through a wasteland inhabited by a dangerous prophet and his followers. Guided only by the graphic novel called Station Eleven given to her by Leander before his death, she sets off on an arduous journey toward the Museum of Civilization, which is housed in a disused airport terminal. Kirsten is not the only survivor with a curious link to the actor: the story explores Jeevan's past as an entertainment journalist and, in a series of flashbacks, his role in Leander's decline. Also joining the cast are Leander's first wife, Miranda, who is the artist behind Station Eleven, and his best friend, 70-year-old Clark Thompson, who tends to the terminal settlement Kirsten is seeking. With its wild fusion of celebrity gossip and grim future, this book shouldn't work nearly so well, but St. John Mandel's examination of the connections between individuals with disparate destinies makes a case for the worth of even a single life. (Sept.) [Page ]. Copyright 2014 PWxyz LLC

NATIONAL BESTSELLER • An audacious, darkly glittering novel set in the eerie days of civilization’s collapse—the spellbinding story of a Hollywood star, his would-be savior, and a nomadic group of actors roaming the scattered outposts of the Great Lakes region, risking everything for art and humanity. Now an original series on HBO Max. Over one million copies sold!Kirsten Raymonde will never forget the night Arthur Leander, the famous Hollywood actor, had a heart attack on stage during a production of King Lear. That was the night when a devastating flu pandemic arrived in the city, and within weeks, civilization as we know it came to an end. Twenty years later, Kirsten moves between the settlements of the altered world with a small troupe of actors and musicians. They call themselves The Traveling Symphony, and they have dedicated themselves to keeping the remnants of art and humanity alive. But when they arrive in St. Deborah by the Water, they encounter a violent prophet who will threaten the tiny band’s existence. And as the story takes off, moving back and forth in time, and vividly depicting life before and after the pandemic, the strange twist of fate that connects them all will be revealed.Look for Emily St. John Mandel’s bestselling new novel, Sea of Tranquility!