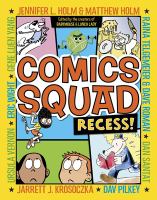 "A collection of comics about every kid's favorite school subject: recess"--

Beloved graphic novelists Jennifer L. Holm and Matthew Holm (Babymouse) and Jarrett Krosoczka (Lunch Lady) have assembled a host of popular artists to create kids' comics celebrating the joys of recess. Gene Luen Yang (Boxers & Saints, 2013) kicks things off with the tale of a geek who hilariously wins his way into "The Super-Secret Ninja Club." "300 Words," by Dan Santat (Sidekicks, 2011), stands out from the crowd: it is a beautifully subtle, funny, and slightly gross love story that features delightfully scruffy art and believable characters. Raina Telgemeier (Smile, 2010) and Dave Roman (Astronaut Academy, 2011) offer a more down-to-earth story about a group of dodgeball fans who discover the appeal of tabletop gaming while stuck inside in "The Rainy Day Monitor." These eight comics by fan-favorite creators, including Ursula Vernon (Dragonbreath, 2009) and Dav Pilkey (Captain Underpants), make up a collection with something for everyone, as long as they like a bit of silliness. Kids will eagerly pick up this lighthearted anthology, thanks to the cheerful cover and familiar characters. Copyright 2014 Booklist Reviews.

Babymouse and Lunch Lady are among a few familiar faces (along with plenty of new ones) in this very funny collection of eight comics shorts from the Holms, Krosoczka, Gene Luen Yang, Raina Telgemeier, Dave Roman, Ursula Vernon, and more. The stories generally embrace a school or recess theme, though in wildly different ways. Eric Wight's talking cupcake, Jiminy Sprinkles, has a playground run-in with some surly vegetables ("They think they're so much cooler than everyone else because they're vitamin-fortified"), while Dan Santat explores homework-sharing and first love in a story that also features an embarrassing and very public vomiting incident. Among the many moments that will keep readers in stitches: Babymouse having her whiskers zapped off by the god Zeus ("You dare insult a mean girl??" he bellows); knockoff versions of President Obama, Iron Man, and Nintendo's Princess Peach competing in an RPG-style game of kickball; and Petey the cat turning the world's citizens "rilly dumb" in a hilariously inane Dog Man story from Dav Pilkey. The orange two-color artwork lets the artists' distinctive styles shine; readers can only hope more such collaborations are on the way. Ages 7–10. (July) [Page ]. Copyright 2014 PWxyz LLC

Gr 2–5—An all-star lineup of graphic novel notables contributes original works to this anthology, sharing the common thread of recess. Holm's Babymouse and Jarrett Krosoczka's Betty characters make appearances in their own vignettes, presented in orange-tinted, two-color palettes, while other characters, such as Eric Wight's Jiminy Sprinkles and Vernon's Scratch and Squeak, make their debut. A wide range of writing styles is featured, from Yang's 18 disciplines of the ninja to Dav Pilkey's tale of George and Harold's invented spelling in their "Tree House Comix," and in each entry, the storytelling is strong and the art reflects each cartoonist's unique style. Two stories that particularly stand out are "300 Words" by Dan Santat and "The Rainy Day Monitor" by Raina Telgemeier and Dave Roman. In Santat's tale, two boys forget to complete a 300-word assignment on Shel Silverstein's The Giving Tree. Having only recess to complete the task, one painstakingly counts his words to meet the required quota in a scene that will elicit audible giggles. The other boy attempts to ask a female classmate if he could copy from her paper, all the while recalling a stomach-turning mishap with said female during the school play. The result is a touching and sweet story that will stick with readers. Telgemeier and Roman's story involves a tabletop game of kickball so fun that kids stuck indoors for recess may be quick to follow suit. This anthology will serve children well as an introduction to a variety of comic-creating talents.—Matthew C. Winner, Ducketts Lane Elementary School, Elkridge, MD [Page 60]. (c) Copyright 2014. Library Journals LLC, a wholly owned subsidiary of Media Source, Inc. No redistribution permitted.

"A collection of comics about every kid's favorite school subject: recess"--