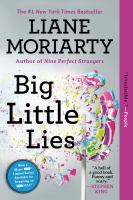 *Starred Review* It begins with a murder. It's not clear who was killed, but it was definitely someone at the Audrey and Elvis Trivia Night fund-raiser at Piriwee Public School on the coast of Australia. Back up six months, to when Madeline Mackenzie celebrated her fortieth birthday with kindergarten orientation for her youngest daughter, Chloe. She runs into the gorgeous, if spacey, Celeste White and her twin boys; new kid Ziggy Chapman and his mom, shy, jumpy, Jane; and, unfortunately, her ex-husband and his New Age wife, Bonnie, and their daughter, Skye. When a little girl accuses Ziggy of choking her, the class moms begin to divide. As antibullying fervor escalates, Jane grows closer to Madeline, with whom she shares her terrible secret, and Celeste, who is hiding an insidious secret of her own, not that she will admit it. What starts as a send-up of suburban helicopter parenting turns darker as the pages flip by, building to a tense climax at Trivia Night, where one too many fizzy pink cocktails leads to . . . well, murder. Funny and thrilling, page-turning but with emotional depth, Big Little Lies is a terrific follow-up to The Husband's Secret (2013). Copyright 2014 Booklist Reviews.

Follows three mothers, each at a crossroads, and their potential involvement in a riot at a school trivia night that leaves one parent dead in what appears to be a tragic accident, but which evidence shows might have been premeditated.

DON’T MISS SEASON 2 OF THE GOLDEN GLOBE AND EMMY AWARD-WINNING HBO® SERIES STARRING REESE WITHERSPOON, NICOLE KIDMAN, SHAILENE WOODLEY, LAURA DERN, ZOË KRAVITZ, AND MERYL STREEPFrom the author of Nine Perfect Strangers, Apples Never Fall, and The Husband’s Secret comes the #1 New York Times bestselling novel about the dangerous little lies we tell ourselves just to survive.A murder...A tragic accident...Or just parents behaving badly? What’s indisputable is that someone is dead.Madeline is a force to be reckoned with. She’s funny, biting, and passionate; she remembers everything and forgives no one. Celeste is the kind of beautiful woman who makes the world stop and stare but she is paying a price for the illusion of perfection. New to town, single mom Jane is so young that another mother mistakes her for a nanny. She comes with a mysterious past and a sadness beyond her years. These three women are at different crossroads, but they will all wind up in the same shocking place.Big Little Lies is a brilliant take on ex-husbands and second wives, mothers and daughters, schoolyard scandal, and the little lies that can turn lethal.