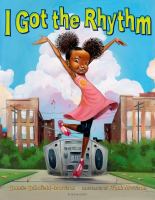 I got the rhythm

On a trip to the park with her mother, a young girl hears a rhythm coming from the world around her and begins to move to the beat, finally beginning an impromptu dance in which other childen join her.

Music is everywhere in the city, but a warm summer day in the park makes it downright infectious. A young African American girl leaves the house with her mother, using all her senses to find rhythm everywhere as they walk. Before long, she has gathered the playground children for a dance routine and inspires an impromptu marching band that fills the park with a riot of sound, color, and movement. Schofield-Morrison has created a celebration of the urban environment. Though nameless, our narrator radiates charm with her puff-ball pigtails, snapping fingers, and effervescent joy at experiencing the city's sounds. The bright palette and vibrant tones of Morrison's loosely painted illustrations echo the energy of the text nicely, and Morrison employs some unusual compositions to heighten the sense of movement. With text like "STOMP STOMP" and "BEAT BOP" strewn across the pages, the book begs readers to sing and move along with this little dancer as she "pops and locks, hips and hops" her way through the sunny afternoon. Copyright 2014 Booklist Reviews.

These husband-wife collaborators present a book that reflects the joy and delight of an African-American girl who's energized by the sounds, sights, and smells around her. Accompanied by her mother and eventually joined by friends, she bops through a city park—puffy pigtails bouncing and a wide grin on her face—as she uses her whole body to respond to and interpret the rhythm she detects around her. The driving beat of debut author Schofield-Morrison's narrative is likely to have readers bouncing and tapping right along with her: "I shook a rhythm with my hips. SHAKE SHAKE. I felt the rhythm with my knees. KNOCK KNOCK." Morrison's (Stars in the Shadows) full-bleed oil paintings make the most of the story's more boisterous moments. His lithe caricatures showcase rubbery limbs, chipmunk cheeks, and arching bodies as the girl breakdances in front of an admiring crowd ("I popped and locked./ I hipped and hopped") and a spontaneous line dance erupts amid a diverse group of children. An upbeat celebration of the senses, self-expression, and camaraderie. Ages 2–6. Agent: Lori Nowicki, Painted Words. (June) [Page ]. Copyright 2014 PWxyz LLC

PreS-Gr 1—A young girl discovers a world of exuberant rhythm in her neighborhood, from the drummer in the park to playground clapping games to the subtle beat of butterfly wings. The straightforward narrative captures the engaging ways the narrator finds her own rhythm exploring the world around her. She "[hears] a rhythm with [her] ears," "[looks] at the rhythm with [her] eyes," "[catches] the rhythm with [her] hands," and much more. Ready made for storytime, Schofield-Morrison's text pulses with a beat of its own and practically demands audiences to clap along. Each double-page spread offers interactive elements that work for a range of ages, from vocabulary presenting each way the narrator catches the rhythm (hands, knees, feet, and more) to the fun readers can have joining in and keeping the rhythm with their own fingers, singing it with their own mouth, or tapping it with their own toes. Morrison's oil-on-canvas illustrations take their lead from the energetic text but form the core of the story with expansive spreads crackling with movement. A rich, color palette helps the action jump off the page, with a bright blue sky as the backdrop for the yellows and golds and greens of the setting complementing an array of pinks, especially the narrator's bright pink dress. The urban setting and varied cast of characters make this title particularly valuable, showcasing diversity as an integral part of everyday life.—Ted McCoy, Springfield City Library, MA [Page 96]. (c) Copyright 2014. Library Journals LLC, a wholly owned subsidiary of Media Source, Inc. No redistribution permitted.

Walking with her mother to the park, an exuberant little girl hears music in the sounds all around her that inspires her to sniff, snap and shake before bursting into an impromptu dance that is joined by other children. Illustrated by the Coretta Scott King/John Steptoe New Talent Award-winning artist of Jazzy Miz Mozetta.

On a trip to the park with her mother, a young girl hears a rhythm coming from the world around her and begins to move to the beat, finally beginning an impromptu dance in which other childen join her.

This toe-tapping, finger-snapping walk through the neighborhood is a treat for the ears and eyes!

On a simple trip to the park, the joy of music overtakes a mother and daughter. The little girl hears a rhythm coming from the world around her- from butterflies, to street performers, to ice cream sellers everything is musical! She sniffs, snaps, and shakes her way into the heart of the beat, finally busting out in an impromptu dance, which all the kids join in on! Award-winning illustrator Frank Morrison and Connie Schofield-Morrison, capture the beat of the street, to create a rollicking read that will get any kid in the mood to boogie.