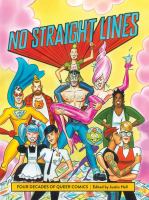 A collection of underground comics created over the past forty years that feature gay men and lesbians and deal with issues of importance to the gay and lesbian community, including stories by Alison Bechdel, Howard Cruse, Ralf König, and David Wojnaraowicz.

The challenge for any editor compiling an anthology of representative works from queer comics over a 40-year period rests on deciding who the volume is aimed at—the LGBT audience or a much wider one? Editor Hall guns for the latter, but without softening the edges that define the genre, and he's quite successful. The majority of the works are autobiographical and lean toward humor, though serious topics are addressed—AIDS, coming-out trauma, discrimination—it's all in here, as well as some cultural info less known outside the gay community, like Robert Kirby and D. Travis Scott's explanation of the codes and etiquette for sex cruising at a porn shop. Among the stand-outs are Mary Wings's tale of a lesbian in the 1920s; Howard Cruse's story about a young gay man remembering the homophobia of his recently deceased uncle; Eric Orner's memoir of a night in Tel Aviv; Dan Savage's remembrance of his first time in drag as a child; and Eric Shanower's eerie fable of teenage experimentation. All of these hit on concerns and experiences that cut to the heart of the human soul, not just the gay one. The section of Allison Bechdel's work presents the standard for queer comics nowadays, offering humor and observations that draw an outside audience right into the culture. (Nov.) [Page ]. Copyright 2012 PWxyz LLC