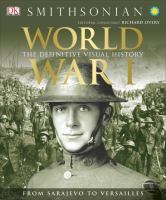 World War I The definitive visual history : from Sarajevo to Versailles

This volume presents a unique and concise approach to examining the key moments of the Great War, from just prior to the declaration of war through its aftermath. Readers will find brief coverage of events, biographies of key people, eyewitness accounts from soldiers and civilians, discussions of weapons technology, and a plethora of stunning visual images. The work is laid out in seven chapters, beginning with "The Troubled Continent 1870–1914" and ending with "Aftermath 1919–1923." Each chapter opens with an introduction and an extensive time line that details each month of the war. Various topics are covered in two-page spreads, full of the visuals that DK is known for—an almost overwhelming number of maps with intricate battle details; vivid photographs of people, places, and items of the era; and other graphics. A concluding section, "In Memoriam," provides information on key battle sites, museums, memorials, and cemeteries by country. As 2014 is the 100-year anniversary of the start of the war, the topic is sure to be popular, and this book belongs in most high-school and public libraries. Copyright 2014 Booklist Reviews.

The new edition of a work first published in 2014 is equally appealing. It is divided into seven chapters, with topics ranging from the building up of alliances in Europe during the latter part of the nineteenth century to the assassination of Austrian Archduke Franz Ferdinand to the Treaty of Versailles. There is a six-page new section here that outlines events in centenary commemoration of the conflict. Each chapter contains maps, timelines, and a plethora of concisely explained subtopical sidebars on major battles, key individuals, weaponry, and more; and every page vividly displays graphics relating to the war. From clear black-and-white photos from the time of the conflict to colorful depictions of a wide array of artifacts, there is always much to see and read. The prose, primarily by military historian G. W. Grant (Flight, 2007) is easily digestible and rewarding, whether the book is read straight through or sampled to learn about specific aspects of the complex war. Recommended to anyone interested in a visually appealing overview of WWI. Copyright 2018 Booklist Reviews.

Heftier than many DK books, this illustration- and fact-packed encyclopedia is chronologically arranged, with seven sections of material covering from "The Troubled Continent: 1870–1914" to "Aftermath: 1919–1923." Each segment offers an opening illustrated time line that resembles a calendar page. Where multiple years are covered, the boxes represent significant months; whereas in the chapter "Stalemate: 1915," for example, several days per month are addressed. In typical DK fashion, spreads cover a subject each in lively detail. They are liberally sprinkled with paintings, maps, photos of troops, battle action, and modern-day locations where the carnage took place and with photos of period artifacts. Opening and closing sidebars outline what happened before and after the events at hand. More granular time lines and stark statistics throughout add value. VERDICT A visual wonder of important historical events, as promised in the title.—HV [Page 100]. (c) Copyright 2014. Library Journals LLC, a wholly owned subsidiary of Media Source, Inc. No redistribution permitted.

Capturing the full experience of WWI is a formidable task, but this new, comprehensive account by historian Grant comes close. He presents information in an accessible manner and makes it easy to peruse a rich array of articles, detailed maps, and images. Remarkable yet little-known figures like Eugene Bullard, an African-American who became the world's first black fighter pilot, are given their due alongside major figures like Marshal Pétain and Field Marshal von Hindenburg. The selection of images builds a remarkable portrait of the war, including an aerial camera used to observe enemy troop movements, wartime propaganda posters, a pigeon named Cher Ami awarded the Croix de Guerre for bravery, and sculptures created by Kathe Kollwitz in honor of her son slain at the first battle of Ypres. Eyewitness accounts of the 1914 Christmas Truce, and startling details like Gen. Douglas Haig's insistence that cavalry armed with sabers had a place in modern warfare, serve as reminders of both the remarkable displays of respect and horrifying incompetence that arose during the conflict. This is a broad, moving, informative account of the war that's perfect for both the young, budding historian and the well-versed WWI reader. Photos and illus. (May) [Page ]. Copyright 2014 PWxyz LLC

A guide to the first World War features timelines, maps, and accounts of the action to bring to life the world leaders, key players, and soldiers who fought the battles with weapons and new technologies that changed history.

This visual guide to the first World War features illustrated timelines, maps, and first-hand accounts of the action to bring to life the world leaders, key players and soldiers who fought the battles with the weapons and new technologies that changed history.

2014 marks the centennial of the start of World War I — DK will mark the occasion with the publication of World War I: The Definitive Visual Guide, a vividly illustrated, in-depth account of the Great War. Written by historian R. G. Grant, and created by DK's award-winning editorial and design team, World War I charts the developments of the war from a global perspective. Using illustrated timelines, detailed maps, and personal accounts, readers will see the oft-studied war in a new light. Key episodes are set clearly in the wider context of the conflict, in-depth profiles look at the key generals and political leaders, and full-color photo galleries showcase the weapons, inventions, and new technologies that altered the course of history. A vivid portrait of the confrontation on land, sea, and sky, World War I: The Definitive Visual Guide offers readers a bold and thoughtful new look at this complex and explosive moment in history.