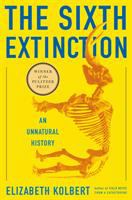 The sixth extinction An unnatural history

Provides a moving account of the disappearances occurring all around us and traces the evolution of extinction as concept, from its first articulation by Georges Cuvier in revolutionary Paris up through the present day. The sixth extinction is likely to be mankind's most lasting legacy, compelling us to rethink the fundamental question of what it means to be human.

*Starred Review* It didn't take long for Homo sapiens to begin "reassembling the biosphere," observes Kolbert, a Heinz Award–winning New Yorker staff writer and author of Field Notes from a Catastrophe: Man, Nature, and Climate Change (2006). By burning fossil fuels, we are rapidly changing the atmosphere, the oceans, and the climate, forcing potentially millions of species into extinction. Five watershed events in the deep past decimated life on earth, hence the designation "Sixth Extinction" for today's ­human-propelled crisis. To lay the groundwork for understanding this massive die-off, Kolbert crisply tells the stories of such earlier losses as the American mastodon and the great auk and provides an orienting overview of evolutionary and ecological science. She then chronicles her adventures in the field with biologists, botanists, and geologists investigating the threats against amphibians, bats, coral, and rhinos. Intrepid and astute, Kolbert combines vivid, informed, and awestruck descriptions of natural wonders, from rain forests to the Great Barrier Reef, and wryly amusing tales about such dicey situations as nearly grabbing onto a tree branch harboring a fist-sized tarantula, swimming among poisonous jellyfish, and venturing into a bat cave; each dispatch is laced with running explanations of urgent scientific inquiries and disquieting findings. Rendered with rare, resolute, and resounding clarity, Kolbert's compelling and enlightening report forthrightly addresses the most significant topic of our lives. Copyright 2013 Booklist Reviews.

This would be a profoundly depressing book if it were not written so very well.  Journalist/author Kolbert (Field Notes from a Catastrophe, CH, Dec'06, 44-2169) describes, often via personal experiences, the devastation humanity has inflicted on the natural world, producing a sixth mass extinction in the long history of life.  She sets the context with some of the best and most accurate accounts, for a popular audience, of the previous catastrophes and then presents several case studies of ecosystem collapse caused by human depredations, accidental or intentional.  The modern stories range from the extinction of the great auk to a heartbreaking account of recent mass mortality among North American bats.  The bright thread that nonetheless shines through the gloomy narrative is the response of some dedicated scientists to these events.  Many have devoted their lives to understanding the complex, varied mechanisms of this biodiversity disaster, contributing solutions to save at least a few endangered species and communities.  The author tells their stories so well that the book reads as an adventure suspense tale.  The science is detailed, accurate, up-to-date, and accessible to any educated readership.  This important book is valuable for all library collections. Summing Up: Essential. All levels/libraries. --M. A. Wilson, College of Wooster Mark A. Wilson College of Wooster http://dx.doi.org/10.5860/CHOICE.186820 Copyright 2014 American Library Association.

Evidence of a human-made mass extinction seems everywhere around us: long lists of endangered species, high concentrations of carbon dioxide in the air and oceans, and biodiversity losses from deforestation of the tropics. New Yorker staff writer Kolbert (Field Notes from a Catastrophe: Man, Nature and Climate Change) traveled all over the world to interview marine biologists, atmospheric scientists, geologists, forest ecologists, and paleontologists about their take on the Sixth Extinction (five other major extinctions have occurred in Earth's history). Tracing how extinction itself evolved as a scientific concept, Kolbert discusses the great animal extinctions of the past as well as the imminent loss of present-day animals such as the Sumatran rhino and the little brown bat. VERDICT The charm of this book (inasmuch as a book about extinction can have charm) lies in Kolbert's hands-on approach to her subject—searching for Panamanian frogs in the dark, hunting for graptolite fossils in Scotland, and observing coral spawning at Australia's Great Barrier Reef. This solid, engaging, multidisciplinary science title should appeal to a broad range of science enthusiasts, particularly those interested in environmental conservation.—Cynthia Lee Knight, formerly, Hunterdon Cty. Lib., Flemington, NJ [Page 126]. (c) Copyright 2014. Library Journals LLC, a wholly owned subsidiary of Media Source, Inc. No redistribution permitted.

New Yorker staff writer Kolbert (Field Notes from a Catastrophe) accomplishes an amazing feat in her latest book, which superbly blends the depressing facts associated with rampant species extinctions and impending ecosystem collapse with stellar writing to produce a text that is accessible, witty, scientifically accurate, and impossible to put down. The eponymous extinction refers to the fact that the current rate of species loss is approaching that of the mass extinctions that ended five previous geologic epochs. Kolbert's reporting takes her from the Andes to the Great Barrier Reef, and from a bare rock island off the coast of Iceland to a cave near Albany, N.Y. Throughout, she combines a historical perspective with the best modern science on offer, while bringing both scientists and species to life. As dire as our problems are today, Kolbert explains that they did not begin with the industrial revolution: "Though it might be nice to imagine there once was a time when man lived in harmony with nature, it's not clear that he ever really did." Kolbert, however, offers some optimism based on the passion the concept of extinction evokes: "Such is the pain the loss of a single species causes that we're willing to perform ultrasounds on rhinos and handjobs on crows." (Feb.) [Page ]. Copyright 2013 PWxyz LLC

Drawing on the work of geologists, botanists, marine biologists and other researchers, an award-winning writer for The New Yorker discusses the five devastating mass extinctions on earth and predicts the coming of a sixth. 75,000 first printing.

Draws on the work of geologists, botanists, marine biologists, and other researchers to discuss the five devastating mass extinctions on Earth and predicts the coming of a sixth.

WINNER OF THE PULITZER PRIZEONE OF THE NEW YORK TIMES BOOK REVIEW'S 10 BEST BOOKS OF THE YEARA NEW YORK TIMES BESTSELLERA NATIONAL BOOK CRITICS CIRCLE AWARD FINALISTA major book about the future of the world, blending intellectual and natural history and field reporting into a powerful account of the mass extinction unfolding before our eyesOver the last half a billion years, there have been five mass extinctions, when the diversity of life on earth suddenly and dramatically contracted. Scientists around the world are currently monitoring the sixth extinction, predicted to be the most devastating extinction event since the asteroid impact that wiped out the dinosaurs. This time around, the cataclysm is us. In The Sixth Extinction, two-time winner of the National Magazine Award and New Yorker writer Elizabeth Kolbert draws on the work of scores of researchers in half a dozen disciplines, accompanying many of them into the field: geologists who study deep ocean cores, botanists who follow the tree line as it climbs up the Andes, marine biologists who dive off the Great Barrier Reef. She introduces us to a dozen species, some already gone, others facing extinction, including the Panamian golden frog, staghorn coral, the great auk, and the Sumatran rhino. Through these stories, Kolbert provides a moving account of the disappearances occurring all around us and traces the evolution of extinction as concept, from its first articulation by Georges Cuvier in revolutionary Paris up through the present day. The sixth extinction is likely to be mankind's most lasting legacy; as Kolbert observes, it compels us to rethink the fundamental question of what it means to be human.