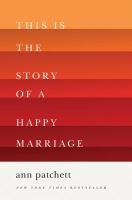 This is the story of a happy marriage

Ann Patchett, author of State of Wonder, Run, and Bel Canto, examines her deepest commitments-- to writing, family, friends, dogs, books, and her husband-- creating a resonant portrait of her life.

*Starred Review* This is the story of how best-selling novelist Patchett (State of Wonder, 2011) became a writer. As a young child in California and, after her parents' divorce, Nashville, she knew she had to write, and she was fortunate, as she so warmly and vividly explains, in her writing teachers—Allan Gurganus, Grace Paley, and Russell Banks—and in her success supporting herself by writing nonfiction for magazines and newspapers, beginning with Seventeen and extending to the New York Times Magazine, GQ, Vogue, and Gourmet. Patchett now assembles a retrospective set of 22 sterling personal essays to form an episodic, piquant, instructive, and entertaining self-portrait. She reflects on her family, life on a Tennessee farm, literary discipline and inspiration, and her failed first marriage. Her second marriage is central to her hilarious account of an RV road trip, and the full measure of Patchett's toughness and daring surfaces in "The Wall," a riveting account of her father, a captain when he retired after 30 years on the Los Angeles police force, coaching her as she takes the grueling admission test for the Los Angeles Police Academy. A self-described "workhorse" who has even opened an independent bookstore, Patchett is a commanding and incisive storyteller, whether her tales are true or imagined. Copyright 2013 Booklist Reviews.

The author of six novels, including PEN/Faulkner Award winner Bel Canto, Patchett has also written nonfiction. Here she pulls together essays appearing in the Atlantic, Harper's, and more to offer overall perspective on Patchett's life, from a topsy-turvy childhood to the sorrows of a bad first marriage and the joys of a second happy one. A sense of what truly grounds Patchett—her writing, her friends, her husband—emerges. [Page 80]. (c) Copyright 2013. Library Journals LLC, a wholly owned subsidiary of Media Source, Inc. No redistribution permitted.

This compilation of 22 essays by novelist Patchett (winner of the Orange Prize and PEN/Faulkner Award; Taft; State of Wonder), many of which previously appeared in magazines or newspapers, together comprise an eclectic group covering a wide range of events on the topic of commitment, from training to get into the Los Angeles Police Department academy to Patchett's career as an author. In the title piece, she recounts the 11 premarriage years she spent with now husband Karl and the lessons they taught her about marriage. In sharing her struggles as a writer and creating the life she wanted for herself, Patchett offers words that gently advise without imposing. Her experiences, large and small, create a connection with the reader in prose that is thoughtful, warm, and encouraging. Each of the essays is its own delight and resonates with warmth and humor from her family and friends, making a short investment of time wonderfully rewarding. If read straight through, the book presents a lovely and lyrical look at a life well lived. VERDICT Patchett provides insight and entertainment for all kinds of readers, and this title will be an asset to any library.—Catherine Gilmore, MLS, Portland, OR [Page 99]. (c) Copyright 2013. Library Journals LLC, a wholly owned subsidiary of Media Source, Inc. No redistribution permitted.

A collection of 22 essays (including a couple of commencement addresses) previously published by accomplished novelist and memoirist Patchett (State of Wonder; What Now?; etc.) offer generous glimpses of her rural, divorced Catholic Tennessee background and winding but determined route to becoming a writer ("The Getaway Car"). Writing nonfiction, first for Seventeen and later a host of magazines as her network of editors expanded, was her bread and butter in the early days, and she has an authoritative, straightforward voice in exploring some of the milestones of her life, such as her deep love for her dog, Rose (not to be confused with the desire for a baby), learning from scratch how to love opera in order to write her bestseller Bel Canto, preparing with her ex-cop father's guidance for the grueling L.A. Police Academy exams ("The Wall"), her startling resolve to start up a Nashville bookstore when no other bookstore was left in her hometown, and her painful but merciful segue from divorce to remarriage. The public addresses she made after the publication of Truth & Beauty, a memoir about her friendship with the deeply tortured writer Lucy Grealy, form the most telling and moving selections, especially her compelling speech ("The Right to Read") given to the Clemson University student body in defense of academic and artistic freedom. Early on, her writing teacher Russell Banks had warned Patchett of being too "polished" and "just getting by," urging her to take risks, and certainly many of these selections reveal a candid, evolved self-reflection. (Nov.) [Page ]. Copyright 2013 PWxyz LLC

Inviting readers into her personal life, the New York Times bestselling author of State of Wonder and Bel Canto shares the stories of the people, places, ideals and art to which she has remained indelibly committed. 100,000 first printing.

Offering an invitation into her personal life, the noted author shares the stories of the people, places, ideals, and art to which she has remained indelibly committed.

A Reese Witherspoon Hello Sunshine Book Club Pick"As the best personal essays often do, Patchett's is a two-way mirror, reflecting both the author and her readers." --New York Times Book ReviewIn this thoughtful collection of essays, New York Times bestselling author Ann Patchett brings her narrative gifts to bear on her own life, using insight and compassion to turn very personal experiences into stories that will resonate with every reader.This Is the Story of a Happy Marriage takes us into the very real world of Ann Patchett’s life. Stretching from her childhood to the present day, from a disastrous early marriage to a later happy one, it covers a multitude of topics, including relationships with family and friends, and charts the hard work and joy of writing, and the unexpected thrill of opening a bookstore.An irresistible blend of literature and memoir, this "sparkling collection" (The New Yorker) is a unique examination of the heart, mind, and soul of one of our most revered and gifted writers.