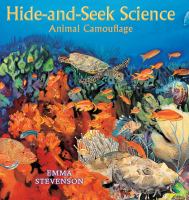 Shows how animals use camouflage in seven different ecosystems by asking the reader to find all the animals in each picture.

In whichever ecosystem they live, animals' camouflage protects them from predators. Stevenson's engrossing way of hiding animals makes the book as much art as science. Reminiscent of the popular I Spy books, this features seven ecosystems in two double-page spreads each. On the first, children seek some number of animals in the ecosystem illustration, while the second double-page spread has a smaller version of the picture with the animals numbered and surrounded by text boxes containing brief descriptions of each. Curiosity and a competitive spirit will have children pointing and counting animals on the hide-and-seek pages, and their enthusiasm should carry over into the fact-based spreads. There are plenty of animal camouflage books out there, but the gouache paintings—vibrant or muted depending on the ecosystem—combined with the inclusion of so many animals, along with their descriptions, makes this stick out from the pack. Copyright 2013 Booklist Reviews.

Illustrator Stevenson makes her debut as an author by taking readers through seven ecosystems and asking them to find animals hidden in each scene. "For animals," she explains, hide-and-seek "isn't just a game. It's a matter of life and death." Although it's more a matter of pointing to the animals in Stevenson's naturalistic gouache paintings than finding them (most are out in the open), it's still no small feat, with the author challenging readers to locate more than 30 animals on most spreads; the final scene, set in a coral reef, boasts 83 animals—including the coral, of course. Stevenson's paintings are reproduced on intervening pages, with each animal numbered; brief details about them are included, but not always enlightening ("Snow geese are white like snow"). The artwork is the main draw. Ages 6–10. (Oct.) [Page ]. Copyright 2013 PWxyz LLC

Gr 2–5—Seven ecosystems and their wildlife are cleverly introduced in this gorgeously illustrated book. The biomes include a swamp, a desert, a rain forest, a savanna, a deciduous forest, a tundra, and a coral reef. Creatures include a manatee, a jerboa, a jaguar, a zebra, a stoat, an orca, and a jellyfish. The 293 animals are hidden (some more than others) on one spread, and children are enouraged to locate them. The following spread shows the same picture, but the animals are numbered and a brief paragraph explains their camouflage. Kids will learn, for example, that the camel is sand colored to match its desert locale. The stunning gouache illustrations are magical and enhance this crowd-pleasing introduction to various environments and their wildlife.—Anne Chapman Callaghan, Racine Public Library, WI [Page 138]. (c) Copyright 2013. Library Journals LLC, a wholly owned subsidiary of Media Source, Inc. No redistribution permitted.

Looks at how animals use camouflage in seven different habitats, with large illustrations for each habitat depicting camouflaged animals followed by a key explaining how each animal uses camouflage and where they are in the illustration.

Examines how animals use camouflage in seven distinct ecosystems spanning the globe: swamp, desert, rainforest, savanna, deciduous forest, arctic and coral reef, and provides a lush full-page spread for each habitat followed by the key that explains how each animal uses camouflage and where they can be found in the illustration.

This stunning book looks at how animals use camouflage in seven distinct ecosystems spanning the globe: swamp (Florida Everglades), desert (Africa's Sahara), rain forest (South America's Amazon), savanna (East Africa), deciduous forest (Europe), arctic (North America), and coral reef (Australia's Great Barrier Reef). For each habitat, a lush full-page spread is followed by a key that explains how each animal uses camouflage and where it can be found in the preceding spread.