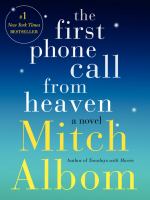 The first phone call from heaven

Albom's latest modern-day fable is less philosophical but more emotionally charged than The Time Keeper. Wrapping this treatise on communication, human relationships, and the nature of heaven inside a nifty mystery, he once again manages to convert his musings on morality and spirituality into a populist page-turner. When embittered pilot Sullivan Harding returns to his small Michigan hometown after a stint in prison for an act of negligence he did not commit, he has to care for his young son while dealing with his feelings of guilt over his wife's death. As Sully attempts to cope with his own demons, various townspeople begin receiving phone calls from deceased loved ones. As word of the Coldwater "miracle" spreads in a media-fueled frenzy, Sully attempts to get to the bottom of both the mysterious calls and his own paralyzing feelings of guilt and remorse. HIGH-DEMAND BACKSTORY: Perennial best-seller Albom ponders the nature of miracles in another thought-provoking, discussion-promoting tale. Copyright 2013 Booklist Reviews.

A series of tragic circumstances land widower Sully Harding back in his hometown of Coldwater, MI, just months before the mysterious phone calls start occurring. The calls, from deceased family members or acquaintances, are made to a few select members of this small community. Some choose to keep the calls a secret while others decide to tell all. When a small news station picks up the story, it isn't long before it goes viral and the sleepy little town is overrun by extreme believers and vitriolic protesters, all demanding proof. Even Sully's young son, Jules, believes his mother will contact him from heaven. But Sully's skepticism prods him to investigate either to uncover a hoax or believe in a miracle. VERDICT Albom (The Five People You Meet in Heaven) artfully captures the emotional turbulence caused by the testing of faith. His story clips along at an increasingly frenetic pace, realistically displaying the ugliness wrought when combining the media circus, mass hysteria, and greed of commercialism. This moving tale of loss, recovery, and the power of love will be snatched up by Albom's many fans. [See Prepub Alert, 5/20/13.]—Joy Gunn, Paseo Verde Lib., Henderson, NV [Page 77]. (c) Copyright 2013. Library Journals LLC, a wholly owned subsidiary of Media Source, Inc. No redistribution permitted.

Phones are ringing off the hook in little Coldwater, MI, but the callers are all deceased, stirring emotions from joyous relief to uncertain fear as they report being happy in heaven. People worldwide are hailing a miracle, but Sully Harding is determined to show that it's a hoax. Sully's wife died while he was doing time for a crime he may not have committed, and he worries when his young son starts carrying around a cell phone, convinced that he will soon be hearing from his mom. With a 1.5 million-copy first printing. [Page 60]. (c) Copyright 2013. Library Journals LLC, a wholly owned subsidiary of Media Source, Inc. No redistribution permitted.

Albom (The Five People You Meet in Heaven) has a nose for "thin places": places where the boundary between secular and sacred is porous, and ultimate meaning is easier to encounter. In his new novel, Coldwater, Mich., is this thin place, a town where people who have lost loved ones begin receiving phone calls from the dead in heaven. Sully Harding's wife died while he was in prison, and their young son, Jules, hopes his mom will call, even while Sully smells a hoax. Albom weaves a thread of satire into a narrative braided from the lives of smalltown residents; Coldwater becomes a media hotspot as well as battleground for religious and antireligious zealots, all awaiting the revelation they expect. A historical thread—popping into the narrative like a change-up in baseball—deals with Alexander Graham Bell's invention of the telephone and how the instrument came to be the premier human connector. This brisk, page-turner of a story climaxes at Christmas. Another winner from Albom; this book just about shouts "Give me for a holiday gift." Agent: David Black, David Black Agency. (Nov.) [Page ]. Copyright 2013 PWxyz LLC

This extraordinary novel, taking readers on a journey both of individual healing and society's response to the question of life after life, follows a single father just released from prison as he sets out to prove that the mysterious calls from beyond to the residents of Coldwater, Michigan, are nothing but a hoax. 1,500,000 first printing.

From the beloved author of the #1 New York Times bestsellers Tuesdays with Morrie and The Five People You Meet in Heaven comes his most thrilling and magical novel yet—a page-turning mystery and a meditation on the power of human connection.One morning in the small town of Coldwater, Michigan, the phones start ringing. The voices say they are calling from heaven. Is it the greatest miracle ever? Or some cruel hoax? As news of these strange calls spreads, outsiders flock to Coldwater to be a part of it.At the same time, a disgraced pilot named Sully Harding returns to Coldwater from prison to discover his hometown gripped by "miracle fever." Even his young son carries a toy phone, hoping to hear from his mother in heaven.As the calls increase, and proof of an afterlife begins to surface, the town—and the world—transforms. Only Sully, convinced there is nothing beyond this sad life, digs into the phenomenon, determined to disprove it for his child and his own broken heart.Moving seamlessly between the invention of the telephone in 1876 and a world obsessed with the next level of communication, Mitch Albom takes readers on a breathtaking ride of frenzied hope.The First Phone Call from Heaven is Albom at his best—a virtuosic story of love, history, and belief.