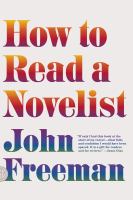 How to read a novelist

National book critic John Freeman pulls together his very best profiles (many of them new or completely rewritten for this volume) of the very best novelists of our time, including such international stars as Doris Lessing, Haruki Murakami, Salman Rushdie, and Mo Yan, to established American lions such as Don DeLillo, Norman Mailer, Toni Morrison, Marilynne Robinson, Philip Roth, John Updike, and David Foster Wallace, to the new guard of Edwidge Danticat, Dave Eggers, Jonathan Franzen, and more....

Critic and former Granta editor Freeman (The Tyranny of E-Mail, 2009) presents a collection of 55 deeply informed and closely observed encounters with exceptional novelists. After stumbling through his first interview with John Updike, Freeman learned that "an interview is a form of conversation that has the same relationship to talking as fiction does to life." Over the subsequent 13 years, Freeman spoke confidently with novelists who have something "to say about the world that can only be said in a story"in conversations he deftly wove into compact yet defining literary newspaper profiles. And what a spectrum he covers, from such towering figures as Toni Morrison, Nadine Gordimer, Joyce Carol Oates, and Günter Grass to Aleksandar Hemon, Kiran Desai, crime writer Donna Leon, and Jonathan Franzen. Haruki Murakami explains why a "repetitious life" is good for the imagination. E. L. Doctorow talks about the balance between the imagined and the historic, and Kazuo Ishiguro comments on the mess Freeman makes while eating scones. Ranging from the profound to the amusing,Freeman eloquently appreciates novelists and the "consolations of narrative." Copyright 2013 Booklist Reviews.

In this collection of 55 interviews with contemporary novelists, critic Freeman, the former president of the National Book Critics Circle and editor in chief at Granta magazine, celebrates his best previously published conversations with international literary figures. He describes his interview experience as seeing the "flesh and blood" of creators of fictional worlds. The most revealing detail mentioned in common among the interviewees is how many years authors dedicate to writing their novels. While the reader may spend one weekend with a book, authors dedicate years. Several writers discuss the motivation they experience after their contemporaries write negative reviews. Authors such as Richard Ford describe the need to get away from writing in order to begin the next novel, while others, including Joyce Carol Oates, say that all they know how to do is write. Additional interviewees include John Irving, Amy Tan, Tom Wolfe, Jennifer Egan, Jeffrey Eugenides, and, Freeman's favorite, John Updike. VERDICT This volume will inspire readers, lead them to new authors, and is an excellent resource for struggling novelists.—Joyce Sparrow, Kenneth City, FL [Page 74]. (c) Copyright 2013. Library Journals LLC, a wholly owned subsidiary of Media Source, Inc. No redistribution permitted.

Award-winning writer and critic Freeman (The Tyranny of Email), editor-in-chief of Granta, has collected 55 interviews in which the great literary lights of our time "explain what it is they don't want left out." In pithy, penetrating profiles, Freeman discusses "the consolation of narrative" with a diverse roster of authors including Richard Ford, Toni Morrison, Kazuo Ishiguro, Aleksandar Hemon, David Foster Wallace, Mohsin Hamid, Marilynne Robinson, Ayu Utami, Jonathan Franzen, Jennifer Egan, Mo Yan, Philip Roth, and many more. In an insightful preface, Freeman describes the allure of the biographical sketch: we read about our favorite writers because we want to understand how a disembodied, imaginative world emerges from the body of the artist. At the same time, it would be foolish to insist that the details of an author's life and writing can explain the mysteries of fiction, or vice versa. To read about the personal, emotional, mental, political, and artistic struggles and triumphs of great writers is to see them as flesh and blood human beings, but that is not the same as understanding how and why people succeed in making transcendent art. These intimate and thoughtful sketches are supplementary pieces to that transcendent work. Agent: Sarah Burnes, the Gernert Company. (Oct.) [Page ]. Copyright 2013 PWxyz LLC

The novel is alive and well, thank you very muchFor the last fifteen years, whenever a novel was published, John Freeman was there to greet it. As a critic for more than two hundred newspapers worldwide, the onetime president of the National Book Critics Circle, and the former editor of Granta, he has reviewed thousands of books and interviewed scores of writers. In How to Read a Novelist, which pulls together his very best profiles (many of them new or completely rewritten for this volume) of the very best novelists of our time, he shares with us what he's learned. From such international stars as Doris Lessing, Haruki Murakami, Salman Rushdie, and Mo Yan, to established American lions such as Don DeLillo, Norman Mailer, Toni Morrison, Marilynne Robinson, Philip Roth, John Updike, and David Foster Wallace, to the new guard of Edwidge Danticat, Dave Eggers, Jonathan Franzen, and more, Freeman has talked to everyone. What emerges is an instructive and illuminating, definitive yet still idiosyncratic guide to a diverse and lively literary culture: a vision of the novel as a varied yet vital contemporary form, a portrait of the novelist as a unique and profound figure in our fragmenting global culture, and a book that will be essential reading for every aspiring writer and engaged reader—a perfect companion (or gift!) for anyone who's ever curled up with a novel and wanted to know a bit more about the person who made it possible.