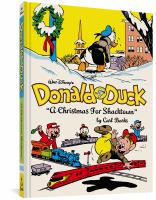 "Huey, Dewey, and Louie resolve to brighten Christmas for the suffering children of Shacktown with help from Uncle Scrooge--but Scrooge has just suffered his own tragedy: he's lost all his money, every dime!"--P. [4] of cover.

A latest compilation of classic Donald Duck and Uncle Scrooge comics focuses on rare pieces from the early nineteen fifties and features the first appearance of Money Bin.

A latest compilation of classic Donald Duck and Uncle Scrooge comics focuses on pieces from the early 1950s and includes the rare story, "A Christmas for Shacktown," as well as the tales, "The Golden Helmet," "The Gilded Man" and a selection of Barks' 10-page adventures costarring cousin Gladstone. 25,000 first printing.

Anchored by the Dickensian “A Christmas for Shacktown,” thisvolume collects the universally beloved comics adventures of Donald Duck, hisnephews Huey, Dewey and Louie, and his Uncle Scrooge.

The second volume of Fantagraphics’ reprinting of Carl Barks’s classic Donald Duck and Uncle Scrooge work, like last spring’s Uncle Scrooge: Only a Poor Old Man, focuses on the early 1950s, universally considered one of Barks’s very peak periods. Originally published in 1951, “A Christmas for Shacktown” is one of Barks’s masterpieces: A rare 32-pager that stays within the confines of Duckburg, featuring a storyline in which the Duck family works hard to raise money to throw a Christmas party for the poor children of the city’s slums (depicted by Barks with surprisingly Dickensian grittiness), and climaxing in one of the most memorable images Barks ever created, the terrifying bottomless pit that swallows up all of Scrooge’s money. But there’s lots more gold to be found in this volume (literally), which features both the “The Golden Helmet” (a quest off the coast of Labrador for a relic that might grant the finder ownership of America, reducing more than one cast member to a state of Gollum-like covetousness) while “The Gilded Man” features a hunt for a rare stamp in South America—two more of Barks’s thrilling full-length adventure stories. But that’s less than half the volume! This volume also features ten of Barks’s smart and funny 10-pagers, including a double whammy of yarns co-starring Donald’s insufferable cousin (“Gladstone’s Usual Very Good Year” and “Gladstone’s Terrible Secret”), as well as another nine of Barks’s rarely seen one-page Duck gags… all painstakingly recolored to match the original coloring as exactly as possible, and supplemented with an extensive series of notes and behind-the-scenes essays by the foremost Duck experts in the world.